The promised Iran product rollout has definitely begun - but Mike Ledeen gives up the secret of where the loudest drumbeat will come from. In an interview with Kathryn Lopez at NRO - yep, the folks at NRO are so keen on war with Iran they're indulging each other in vicarious wish-fulfillment - he reveals that Saint General Petreaus himself has a key role to play as well as plainly stating the Cheneyite game-plan.

Lopez: What’s been the biggest mistake?

Ledeen: The failure of strategic vision, which endures still: believing “the war” was in Iraq alone, and that we could liberate and protect Iraq from inside her borders. It always was a regional war, but we keep denying it, above all to ourselves.

Lopez: How can it be remedied ASAP?

Ledeen: Call for regime change in Damascus and Tehran, and threaten Riyadh with grave actions if the Saudis don’t stop funding the jihadi global network.

...Lopez: You do a little criticizing of General Petraeus on Iran. How’s he been doing this summer?

Ledeen: Magnificently. and I am told his report is particularly brilliant on Iran.

Lopez: How much better might have the Iraq war gone if we had addressed Iran differently?

Ledeen: I thought at the time that if we supported revolution in Iran, it would almost certainly succeed, and then we would not have had to face the jihad from Iran, Syria, and Saudi Arabia when we went into Iraq. I also thought that our strategy in Iraq was excessively military and insufficiently political.

What drives me crazy is that even our most brilliant analysts — among whom I count some very close friends — still aren’t talking about the regional war. They still talk about Iraq alone. And down that road only misery lies.

Lopez: If there’s on message you hope to effectively get out to members of Congress, especially this month, what might it be?

Ledeen: That they’re debating the wrong question. We have to win the war, but the real war, not the battle for Iraq. We must have a winning strategy for Iran and Syria. I don’t think it requires the use of massive military power, although I do think we should attack both the terrorist training camps in Iran and Syria and the sites in Iran where the new explosive devices are being manufactured and assembled.

In other words, I agree with Lieberman, although I don’t think he is yet prepared to talk about a regional war.

Along the way, Ledeen bashes Reagan for being an appeaser of Iran, says Iran (not Osama) is in control of Al Qaeda and claims Hezboullah are the "the spinal cord of the 'insurgency' in Iraq. I wonder how he intends to bomb EFP manufacturing sites in Iran when the only such sites so far found are all in Iraq and not a single EFP device has been found crossing the Iran-Iraq border? Indeed, there are all kinds of problems with the EFP narrative.

But the neocon Wormtongues also have another line of warhype - Iran's alleged nuclear weapon's program. Back when they were ginning up the invasion of Iraq over spurious WMD claims, they tried very hard to get rid of the director of the IAEA, Mohammed el-Baradei. It was inconvenient the way he kept saying there were no Iraqi WMD because...well, there weren't. Now, as el-Baredei's IAEA continues to clear up outstanding questions about Iran's program and continues to say it has found no evidence of a weapons program, the push to remove the troublesome director is back on again. His crimes are telling the truth and refusing to accept the current spin that Iran must want a bomb because there's no other possible reason for having a nuclear program in a nation awash with oil.

El-Baradei, being an actual expert in the field, has a longer memory than the warmongers are comfortable with. He recalls, as few in the U.S. do, that it isn't that many years since America was just fine with an Iranian nuclear program. 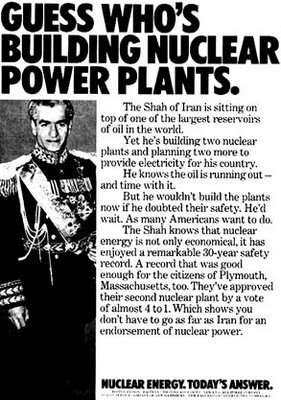 The reasons for the Shah's nuclear program are just as relevant today - Iran's oil won't last forever and if oil can be sold for foreign currency instead of burned to provide power, and the money can then be invested in other infrastructure, then it can help bootstrap the nation into the 21st century. Those were the reasons Donald Rumsfield gave for selling Iran its first reactor. Enriching uranium is a sensible precaution under such circumstances - the paranoid U.S. has tried to stop Iran getting fuel from external sources and succeeded in stopping Russia providing fuel. Doubtless, Iran has also noticed the large amounts of money nations can make from enriched uranium sales - a lucrative market the current cartel of France, Germany, Netherlands, UK, USA, and Russia have been determined to keep to themselves since 1972.

Some would have it that the current Iran drumbeat is simply a game of bluff on the part of the Bush administration - designed to "stiffen spines" in Europe and at the IAEA and thus "pass new sanctions via the U.N. Security Council, not go to war". Yet ongoing reports from various sources of a split in the administration between the Cheney and Gates/Rice camps, with the Cheney faction now ascendant, suggests otherwise. In such circumstances, it would be better to deal with the crazies in the Fourth Branch as the sociopaths they are than to give them any kind of chance to claim broad-based support.
Posted by Cernig at 9/05/2007 01:09:00 PM

Something I did want to know about the meeting in between the Pope and the
President that is not truly news either is how
did the President greet the Pope?