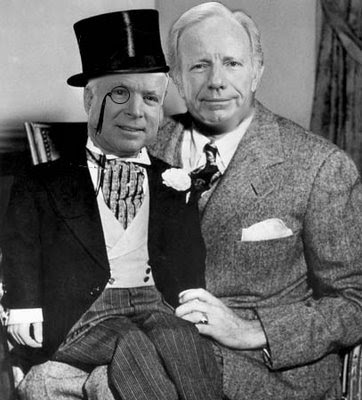 Via Jill from Brilliant at Breakfast (and I've stolen her graphic too), I see John McCain still has Joe Lieberman's hand up his ass and wood in his head.

When McCain made a foreign policy gaffe in Jordan on Tuesday, it was Sen. Joe Lieberman who quietly pointed out the mistake, giving McCain an opportunity to correct himself in front of the international press corps. In Israel yesterday, NBC’s Lauren Appelbaum reports, Lieberman once again intervened when McCain made an incorrect reference about the Jewish holiday Purim -- by calling the holiday "their version of Halloween here."

...Purim is not the equivalent of an Israeli Halloween, Appelbaum notes. The holiday -- although a joyous one -- commemorates a time when the Jewish people living in Persia were saved from mass execution. When Sen. Lieberman had a chance to speak at the press conference, he placed the blame of the mistake on himself. "I had a brief exchange with one of the mothers whose children was in there in a costume for Purim," Lieberman, who is Jewish and celebrates the holiday, said. "And it's my fault that I said to Senator McCain that this is the Israeli version of Halloween. It is in the sense because the kids dress up and it's a very happy holiday and actually it is in the sense that the sweets are very important of both holidays."

It doesn't matter if Lieberman is trying to be a good little Sancho Panza here for McCain's Don Quixote, not when McCain seems to NEED Lieberman to do his thinking for him.

That was Tuesday. By Thursday, McCain was in London pressing flesh with socialists and anti-war conservatives. Oh, and promising to hold India and China to a global warming deal. I presume that means he intends holding the U.S. to one too. Are the rightwingers simply looking the other way in unison or is it that they're ignorant of McCain's plan? Or maybe they just know that McCain will say or do anything to try to look less like Bush (while abroad) and more like he has a functioning braincell (at any time), but they shouldn't take it seriously.
Posted by Cernig at 3/20/2008 11:56:00 AM