The Man Who Shot Bhutto (Updated) 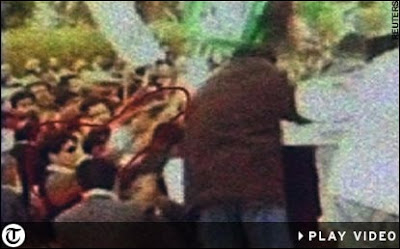 The above amateur picture is of a man aiming a handgun towards Benazir Bhutto's vehicle. The Daily Telegraph spoke to Safdar Abbassi, her chief political adviser, who was sitting behind her.

"All of a sudden there was the sound of firing. I heard the sound of a bullet."I saw her: she looked as though she ducked in when she heard the firing. We did not realise that she had been hit by a bullet."

He had looked up to see Ms Bhutto sliding back through the aperture in the roof of the white Land Cruiser. Moments later, the car was rocked by a huge explosion.

There was no sound from the fallen leader.

...Dr Abbassi leant forward to see what was wrong. At first glance, she appeared to have escaped injury. Then he noticed the blood. It was seeping from a deep wound on the left side of her neck.

His account is confirmed by photos that have surfaced in Pakistan showing a man in dark glasses aiming a handgun and standing only few feet from Ms Bhutto, moments before she died.

Naheeb Khan, his wife, cradled the injured woman's head in her lap, reaching up for her own headscarf, pulling it from her head, pressing it into the wound, trying to stem the flow. But the wound was deep and the blood seeped out, spreading down her neck and across her blue tunic.

The official Pakistani government line is that Ms Bhutto caught her head on the sunroof's catch as she ducked inside, fracturing her skull. "Absolute facts - nothing but facts," it said of its account. But Dr Abbassi leaves little room for doubt. There was too much blood, he said, and a gaping wound in her neck. She had been shot.

..."We thought she had ducked in but she had not, she had fallen down," said Dr Abbassi. "She did not say a single word. For a few seconds we thought she was confused by the firing and that is why she was not talking. We did not realise…"

Before anyone had a chance to speak, the attacker detonated his explosives, peppering the vehicle with ball bearings.

"There was a big bang. Some of the shrapnel hit the car and then the driver sped away." In the following car, Farhad Ullah Babar, Ms Bhutto's chief spokesman, saw his leader disappear back inside her car. "There was a huge bang and everyone was running from one place to the other but the vehicle was still moving," he said. "She disappeared. So we thought, because she had gone inside, that she was safe."

But inside the car in front, realisation was dawning. "We saw the blood: the blood was everywhere, on her neck and on her clothes and we realised she was hit. She could not say anything," Dr Abbassi said, his shirt still stained with Ms Bhutto's blood.

Able to do nothing more than stanch some of the bleeding, they made for the nearest hospital. Ms Bhutto was still alive when she was carried into the intensive care unit, but her injuries were so severe that she stood no chance.

"The doctors really tried their best but it was too late," Dr Abbassi said, amid tears. "I was so optimistic: I thought nothing would happen to her. I still feel she is alive. I cannot believe she is with us no more."

And the Daily Mail reports that, weeks before she died, Bhutto sent an email to UK Foreign Secretary David Miliband in which she named three Musharraf allies who she said were out to kill her. The Mail says it knows the names but has decided not to publish them.

One is a senior intelligence officer and retired army officer who worked for Pakistan's sinister Inter Services Intelligence spy agency, which has close links to the Taliban and has been involved in drug smuggling and political assassinations. He allegedly directed two Islamic terrorist groups and reportedly once boasted that he could pay money to hired killers to assassinate anyone who posed a threat to Musharraf's regime.

He was given another senior intelligence post by Musharraf after his bid to become a senior overseas diplomat for Pakistan failed when the host country refused to let him in because of his past activities.

He was also linked to Omar Sheikh, the former British public schoolboy convicted of kidnapping US journalist Daniel Pearl, who was murdered in 2002 by having his throat cut and being decapitated by Islamic terrorists.

The second individual named by Miss Bhutto is well known in Pakistani political circles and has been involved in a vicious family feud with her for decades.

One of his relatives was said to have been murdered by the militant Al Zulfiqar group run by Miss Bhutto's brother, Murtaza. The organisation was set up to avenge the execution of Miss Bhutto's father Zulfiqar Bhutto by ex-Pakistan dictator Zia ul Haq.

The third individual is a chief minister who has repeatedly denounced Miss Bhutto - and faced political annihilation if she won the elections scheduled for next week. He made an outspoken attack on her only hours before her death.

Grainy images of a balding man firing two shots at Miss Bhutto before detonating an explosion are now being enhanced by security agencies investigating whether the plot was the work of a rogue terror outfit or was masterminded by either Al Qaeda affiliates or renegade elements within President Musharraf's government.

One photo shows a man in a dark suit and wearing sunglasses within 12 yards of Miss Bhutto and pointing what appears to be a gun at her. Just behind him is another man, dressed all in white, who the Dawn News channel said was an associate of the gunman and who activated the bomb. Another picture shows Mrs Bhutto falling back into her car and disappearing from view before the explosives are triggered.

Security sources have revealed that 11 lb of explosives and two pistols found near the body of the assassin are being looked at by forensic experts and fingerprints taken from the killer's corpse are being checked against the records of the ISI, Pakistan's military intelligence arm.

Why wasn't that 11 pounds of explosive detonated by the massive explosion too, I wonder? And note that Bhutto fell back inside the car before the bomb went off.
Posted by Cernig at 12/29/2007 04:13:00 PM