Two Days After Petreaus - Another Wall In Iraq 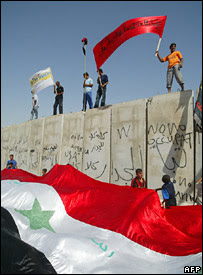 Absent any political reconcilliation in Iraq, the U.S. military's strategy appears to be to enable balkanization along ethnic lines. It isn't a plan that meets with the approval of all Iraqis.

Hundreds of Iraqis have staged a protest against the building of a dividing wall between a Shia district of Baghdad and a Sunni area.
Residents of the Shula and Ghazaliya districts waved Iraqi flags and chanted slogans rejecting both the proposed separation and the US occupation.

They demanded the government intervene to ensure the barrier is demolished.

The US military said the wall would reduce sectarian violence and stop the movement of weapons and militants.

...Tuesday's demonstration saw many residents of Shula and Ghazaliya march between the two areas before gathering in front of the first completed section of the 2km (1.25 mile) wall.

Carrying banners reading "No to the dividing wall" and "The wall is US terrorism", the protesters issued a statement demanding that Iraqi authorities intervene.

"The wall is in accordance with al-Qaeda's plans," the statement said, adding that it would "separate family from family".

The situation is identical to protests over the construction of a wall around the Adhamiya district back in April. Then, Iraqi PM Nour al-Maliki at first ordered the wall to be demolished before u-turning and supporting U.S. military plans.

Back in May the commander of the 2nd "Falcon" Brigade Combat Team, 82nd Airborne Division, Colonel Billy Don Farris, was wounded by a sniper while touring the wall. Three weeks ago, seven soldiers from the 82nd - which has an area of responsibility including the walled Sunni enclave - wrote an op-ed for the NY Times which was highly critical of the occupation, saying preceptions that violence was manageable were deeply flawed.

On Monday Sgt. Omar Mora and Sgt. Yance T. Gray, two of the NYT op-ed's writers were tragically killed in a vehicle accident in or near Adhamiya. They would likely be aghast at this continued plan to segregate Iraqis and temporarily damp-down the civil war. It's simply dishonest that the Bush administration and the U.S. military won't admit that is all they are accomplishing, all they are trying to accomplish.
Posted by Cernig at 9/12/2007 02:22:00 PM