Battle Of The Mosques 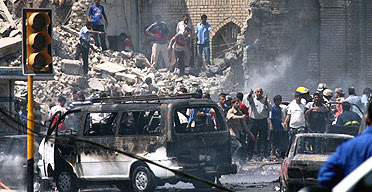 The Guardian reports today that a bomb attack on a Shiite mosque in Baghdad has inflicted massive casualties, with at least 75 dead and over 200 wounded.

The attack followed a four-day curfew imposed last week in the wake of an attack on a Shia shrine in the city of Samarra.

One witness said a suicide bomber driving a truck rammed his vehicle into the mosque, destroying one of its walls and badly damaging the rest of the building. The explosion was so powerful it rattled windows across the city centre.

...Gunfire erupted shortly after the latest bomb attack in Baghdad at the Khillani mosque in the commercial area of Sinak, just before 2pm. The Sinak area has been hit before: a suicide car bomber killed at least 21 people in May.

In other violence, a roadside bomb killed the head of a Shia tribe and two people travelling with him near Hillah, about 60 miles south of Baghdad, local police said.

I hate to flog a deceased quadruped, but this just points up what I was saying in my last post. Al Qaeda has been blamed for the original attack that sparked this set of tit-for-tat bombings, even though there is no eviudence of their involvement. However, it seems clear that it takes a minimal amount of manpower by any group to carry out such strikes, fuelling sectarian fueds further. Throwing Al Qaeda as a whole out of Dyala isn't really going to impact that equation much, if at all. There's so much explosive material washing around Iraq that assembling the raw materials is relatively simple and there are thousands upon thousands of Iraqis with the skill to assemble simple detonator systems. It's unclear to me that major combat operations are the answer to such assymetric warfare.
Posted by Cernig at 6/19/2007 01:00:00 PM