I don't like pointless and counterproductive laws for a couple of reasons. First, they are an opportunity cost of doing something else better, be it pass a better law, learn more about a subject or get a good night sleep. Secondly, they introduce a little more friction in both the public sphere and option space as well as in the economic sphere. Every now and then I understand the political imperative of passing a pointless bill to illustrate differences between the parties, or to have Congress look like it is doing something when it really can't do anything about a high salience issue.

The recently passed anti-energy price gouging law hopefully is a meaningless bill that will die a reasonably quick and quiet death. I don't think it will do much of anything as it is a law against actions that very seldom occur and if they do occur they do not last long. Additionally, this law misdiagnosis the market forces and market power in a relevant emergency situation.

Right now the big driver in the current level of oil prices is constrained supply which means expensive crude oil and refinery capacity starting to hit their maximum sustainable production limits. The gas station owner or the regional distributer to multiple gas stations does not have a whole lot of pricing power.

The station owner is in pretty fierce competition with numerous other local stations that offer nearly perfect substitutes. An individual owner may be able to compete on location, number of pumps, and the quality of their coffee, but this will make a marginal (pennies) difference in price per gallon. The regional distributers have a little more localized pricing power but not much for gasoline is a fungible and easily truck transportable commodity. The one big constraint on this simple story of the local gasoline market is the multitude of summer cleaner air gasoline blends that restricts national or regional trading. However this constraint is not an absolute constraint.

The refineries are not making a significant amount of money as this chart from PGL at Angry Bear shows.

Gasoline and other refined fuel products could be slightly less expensive if refinery utilization rates were running all out as they have over the past couple of years. 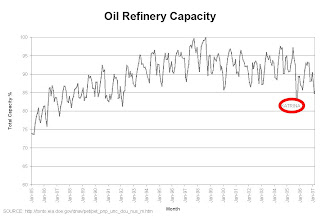 The most recent data[Excel file] from the Energy Department shows a slight downtrend in utilization rates, but the dip is not significant compared to multi-decade trend data. Since this data series closed, there have been a couple of accidents and fires at several refineries, but unfortunately these are 'expected events' that occur nearly every year.

The people who are making significant money over the increase in oil and gasoline prices are not the retailers, not the taxing bodies as gasoline taxes have not systemically increased, and not most refiners. The people who are making money are the ones who own cheap and easy to extract oil, drilling and drilling support firms, and refiners who can handle heavy, sour, low quality crude oil. Their behavior during a localized crisis will not change as they do not have the flexibility, agility or even sufficient greed to really piss off people for cause to make 'only' a couple of million extra bucks on a hurricane in Virginia. They are sitting on the economic bottleneck of industrialized societies and they are extracting significant rent. They do not want to end this pattern over peanuts.

This law is at best a useless 'feel-good' measure and a cheap quasi-populist, bi-partisan vote. If we assume markets are usually, somewhat, mostly efficient as they tend to be in the real world, localized panics such as Atlanta in the days after Katrina will quickly abate. Governmental powers are already sufficient to get needed supplies in emergencies, so I hope this bill dies a quick and painless death.
Posted by fester at 5/23/2007 06:44:00 PM