Pakistan On Brink Of Disaster 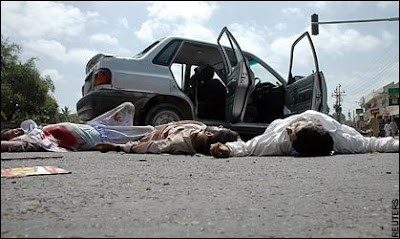 The headline for this post is taken from the UK's extremely conservative Sunday Telegraph newspaper and is no hyperbole - the current situation will either bring down Musharaff or bring down any hope that Pakistan can become a more democratic nation in the short to medium term. The Telegraph reports:

Chaos gripped the streets of Karachi yesterday as gun battles left at least 31 people dead and hundreds more injured, threatening a complete breakdown of law and order in Pakistan's largest and most volatile city.

With plumes of black smoke billowing over the city of 12 million people, there were extraordinary scenes as gunmen on motorbikes pumped bullets into crowds demonstrating against Pakistan's President Pervez Musharraf, while police stood by and watched.

In images more reminiscent of Baghdad, bloodstained corpses lay where they had fallen in the streets and bodies piled up in hospital morgues. As the sense of crisis deepened, a crisis meeting between Gen Musharraf and the prime minister, Shaukat Aziz, resolved to send in paramilitary troops to restore order, and to place the army on standby. The men agreed that a state of emergency would be imposed if the first two options failed.

It was the bloodiest escalation of the two-month long saga which began when the president attempted to sack the country's chief justice in March. The ensuing challenge by lawyers and opposition parties to Gen Musharraf's eight-year rule has left the president - a key Western ally in the "war on terror" - desperately clinging to power.

Opponents believe he had hoped to create a compliant judiciary ahead of elections which he has promised to hold later this year. But what started as a political confrontation has now lit Karachi's tinderbox of ethnic rivalry.

Many of the 15,000 police and security forces deployed in the city stood idly by as armed activists from Karachi's ruling party, Muttahida Qaumi Movement (MQM), a coalition ally of Gen Musharraf, blocked Mr Chaudhry's exit from the airport and took control of the city's central district.

The MQM's actions are seen by Pakistanis as being wholey within the control of Musharaff and thus ordered or condoned by him. That perception is bolstered by the inaction of police and paramilitary rangers. Moreover, the "rebellion" against Musharaff doesn't have its root in Islamist extremism, but rather in outrage among the middle class and professionals that Musharaff is so obviously doing an end-run around what is left of pakistani democracy and the rule of law.

Inside Mr Chaudhry's intended destination, Sind's high court, hundreds of lawyers, some of them bloodied after being beaten up by MQM supporters, milled about chanting slogans and receiving news on their mobile phones about the trouble engulfing them. Outside, MQM activists with pistols tucked into their jeans, blocked the entrance.

Lawyers railed against the government. "This is a shocking attempt by the government to suppress the people," Iqbal Haider, a human rights lawyer and former senator, told The Sunday Telegraph. "Musharraf is making all sorts of mistakes to save himself from sinking."

Meanwhile, Musharaff's support is collapsing. Even though government workers were given a half day holiday to attend a pro-Musharaff rally in the Pakistani capital today, only some 30,000 of what had hoped to be 300,000 supporters attended. Worse still, only 15,000 stuck around long enough to hear Musharaff speak and many of those told a Pakistani newspaper they had been promised payment for attending. The Daily Times also reported Human Rights Watch as saying that "the prevention of a peaceful reception for the chief justice by Musharraf’s supporters demonstrates the military government’s intolerance for civil society actions and has triggered widespread violence and death."

As Alex at The Blue State notes, for Americans that should bring "more starkly into relief the notion that 'our son of a bitch' in Pakistan may not be the Shining Knight of Democracy our PR people need to win hearts and minds there, or elsewhere."

Update I've a further post here, as the violence in Karachi continues into its second day. My belief is that Mushraff will increasingly have to rely on foreign backing by such as the Bush administration to bolsetr his regime - but even more heavily on the Islamists who now provide most of his at-home political support as well as infesting the military and intelligence service.
Posted by Cernig at 5/12/2007 06:18:00 PM