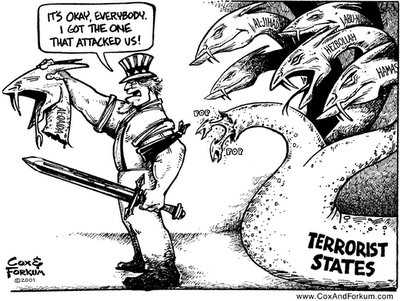 In the realm of punditry on or about international terrorism, you can find experts and analysts who will say just about anything you want them to, if you are selective enough.

And what Americans want to hear is that the death of Zarqawi will be a major blow to the Iraqi insurgency, to al-Qaida globally and to Islamist terrorism in general. Thus we get articles like today's Washington Post piece (and literally dozens of op-eds by rightwing pundits who really want to hear some good news amongst the debacle their push for adventurism has created in Iraq), which trots out experts galore to say that they don't think there is a natural replacement for Zarqawi and that "whoever succeeds him will be hard-pressed to achieve the same level of notoriety or to unite the foreign fighters in Iraq under a single command."

But now take a read at an article in the New Zealand press by British-based Reuters - N.Z. is less involved at a personal level in Iraq and it's citizens don't seem to need to have a periodic mainline of "good news" quite as much as Americans or Brits. The Reuters article also speaks to distinguished terrorism experts and analysts and comes up with a bunch of new heads for the hydra.

One is Abu Ayyub al-Masri, a close Zarqawi associate who hails from Egypt. He is favored by the U.S. military (and the WaPo's analysts) - if only, it seems, because then they can keep telling the hoary old chestnut about it being foreign fighters who really drive the Iraqi insurgency and all the Iraqi people want is peace.

Another is native-born Abdel Rahman al-Iraqi, who is currently described by Al Qaida in Iraq as the group's deputy leader. One terrorism expert who has actually met bin Laden says al-Iraqi would return to targeting US troops and Iraqi security forces - a move that would bolster his standing with the wider insurgency.

Then there is Abdullah Rashid al-Baghdadi, who currently heads the Mujahideen Shura Council, an umbrella body composed of al Qaeda in Iraq and other militant groups. His taking direct command of Al Qaida in Iraq would signal it's folding into the aims of the wider insurgency and a possible sidelining of Bin Laden at least as far as Iraqi terrorism goes.

In a nutshell, then:

"If they choose a foreigner to head al Qaeda it would be easier for him to kill many people brutally because he will not be one of their own and cause resentment," said Hazim al-Nuaimy, a professor at Baghdad's Mustansiriya University.

"On the other hand, choosing an Iraqi would mean having a leader who knows the terrain and how to build ties with tribes that could be a threat to al Qaeda if they turn against it."

A fourth possibility is - all of the above - with a further decentralization of the overall insurgency in Iraq. That gives tactical possibilities for fommenting discord between groups (think Monty Python's Life of Brian) but it also creates a whole bunch of new hydras to worry about.

Even the WaPo, at the very end of it's article, quotes one expert who says this has already happened:

Nawaf Obaid, director of the Saudi National Security Assessment Project, said Zarqawi's network had already been eclipsed in size and strength by other groups of foreign fighters in Iraq. He said units led by Egyptian, Saudi and Algerian commanders posed a much more serious military threat than al-Qaeda in Iraq, although much less is known about how their operations are organized. The strongest, he said, are North African groups in Iraq composed largely of veterans of the civil war in Algeria.

"They're completely autonomous organizations," Obaid said in a telephone interview from Riyadh, Saudi Arabia. "They're more powerful than Zarqawi was and have more weaponry and money at their disposal. They all have their own networks, their own fundraising abilities and their own way of bringing in fighters."

A final consideration and word of caution for those who are a little too jubilant about this death "breaking the back" of anything at all. Any combat veteran will tell you that those promoted from the ranks because of their combat experience almost always make better commanders and leaders than those who attained their positions before the fighting really got started. Sometimes, when you get rid of a Haig, you end up with a Rommel.
Posted by Cernig at 6/10/2006 03:38:00 PM