The New York Times has an interesting report on inflation in the Middle East, with a focus on how the basic neccessities in Jordan are skyrocketing.

Mr. Abdul Raheem, the clothing store employee in Amman, said, “No one can be in the government now and be clean.”

Meanwhile, his own life has been transformed, Mr. Abdul Raheem said. He ticked off a list of prices: potatoes have jumped to about 76 cents a pound from 32 cents. A carton of 30 eggs went to nearly $4.25 from just above $2; cucumbers rose to 58 cents a pound from about 22. All this in a matter of weeks.

The basic analysis of the reporter is that inflation is increasing because of a combination of corruption, government subsidies and generically higher prices for basic commodities throughout the entire world. There is one major element that he is missing, and that is the role of fixed exchange rates.

On Wednesday the state-owned newspaper Al Thawra published a poll that found that 450 of 452 Syrians believed that their state institutions were riddled with corruption....

Corruption, inefficiency and monopolistic economies worsen the impact, as government officials or business owners artificially inflate prices or take a cut of such increases.

“For many basic products, we don’t have free market prices, we have monopoly prices,” said Samer Tawil, a former minister of national economy in Jordan. “Oil, cement, rice, meat, sugar: these are all imported almost exclusively by one importer each here. Corruption is one thing when it’s about building a road, but when it affects my food, that’s different.”

Corruption, inefficiency, and monopolistic economies are short term constants. There is little reason to believe that Jordan is any more or less corrupt today than it was a year ago, and the same applies to Syria, Bahrain, Saudi Arabia, and the United Arab Emerirates. The price of corruption has not doubled in the past couple of weeks.

However one thing has changed significantly in the past year and that is the exchange value of local currencies. Most Middle Eastern currencies are either explicitly pegged to the US dollar, linked to Special Drawing Rights at the IMF, which is an indirect link to the dollar, or are carefully managed to float against a narrow range of a basket of currencies, of which the US dollar is the constant.

This is not that bad of a theory when the US economy moves in roughly the same cycle as the local, dollarized economy, and when the US dollar is able to hold its own value against the currencies of the major trading partners of the fixed rate country. Right now the pegged Middle East is not seeing either condition being met. 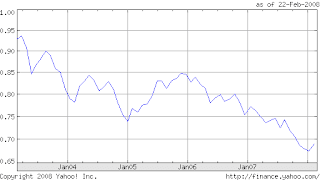 The US economy is slowing down, but cash inflows are still rising in the Middle East due to high demand for oil. A slower US economy means the proper policy response is lower interest rates, which we have seen. A faster growing Middle Eastern set of economies needs either stable or increasing interest rates to minimize inflation. The US dollar has crashed hard against the Euro, which is a massive trading partner for most of the Middle East (chart from Yahoo.com.)

The combination of lower interest rates, and a weaker dollar means that anything imported from Europe or other non-dollarized/hard peg economies will become comparatively more expensive, all else being equal. And until/unless the US economy strengthens, or the Middle Eastern economies dramatically weaken so that the Federal Reserve's mandated policy focus of the US economy coincides with the policy needs of the dollar-linked Middle East, inflation will continue in the region. The other option is for the fixed rate countries to start breaking away from the US dollar and either freely float over the course of time, or peg against another currency or set of currencies.
Posted by fester at 2/25/2008 07:44:00 AM