Update on the Hafer Campaign

I've been trying to get in touch with the Hafer campaign to follow up on my post asking what was going on with the low level of activity. I have a second order connection with the campaign manager via previous political work and LinkedIn and e-mailed him about a week ago, and also went through the website. So far I have heard nothing back. However, it looks like the campaign is active again after taking most of a month off from public events. 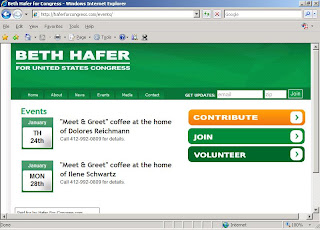 At least some events are being hosted in the next couple of weeks, and the phone number is the campaign office number. Good to see. The next thing I want to see if the 4th Quarter fundraising which should be released within the next week or so.
Posted by fester at 1/23/2008 07:57:00 AM