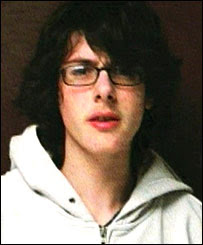 To the left is a picture of Richard Hawkins, the teen who walked into a mall in Omaha, Nebraska yesterday and shot dead nine people. He wrote in his suicide note that he wanted to be famous.

Bar a fleeting couple of days and a footnote in a couple of textbooks, he's unlikely to get his wish. The killing of nine people by a teenager with an assault rifle just isn't that remarkable in America anymore, it seems. Over at Memeorandum today, for instance, there's not a single blog post on the subject listed.

If Hawkins had been a convert to Islam, or an immigrant, rightwing bloggers would have found room for a post or several among their musings about Romney's electability and Bolton's paranoid fantasies. If Hawkins had been a regular poster at Free Republic or a prominent gun advocate, leftwing blogs would have found room between speculation about how long Bush knew about the latest NIE or how electable Hillary is.

Nine people are dead and it seems to me that no-one cares the day afterwards because there's no angle to serve their own agendas. Or perhaps because the very frequency of such events means they're all written out about their own agendas and can't be bothered revisiting the arguments again.

Let's revisit those arguments, not just this time but every time. Here's mine.

Two thirds of all murders in the U.S. are committed using a gun. I understand that gun advocates say not having guns for self-protection just makes matters worse - all the guns are then owned by criminals - and point to Britain's strict gun laws and own problems with gun crime as evidence. I understand that there's a big tradition of hunting with guns in the U.S. too. Britain doesn't have the wilderness or the game to have the same level of hunting so their isn't as large a pressure from that lobby. I see some possible merits in their arguments, intellectually, even though I'm emotionally opposed to gun ownership (I was in Dunblane on 13th March 1996).

But for the sake of innocents, can we at least agree that tighter controls on gun ownership and the security of guns in the home are needed? Hawkins apparently "borrowed" a fully automatic assault rifle from an adult. That just shouldn't be so easy to do. Actually, can we just agree that letting the ban on assault rifles lapse was a stupid thing to do? I don't really give a flying f**k if only the criminals will have assault rifles. Mostly, they shoot them at each other. Criminals don't walk into malls or classrooms and let fly at random.
Posted by Cernig at 12/06/2007 11:38:00 AM