Barry Ritzholtz grabbed this great graph from the Wall Street Journal first, and it shows the supply of houses available for sale based on the number of months at current rates would it take to sell every single house on the market. The rule of thumb is that normal supply is about 6 months, bubble supply is anything less than 4.5 to 5 months, and tough markets have about 8 months. Remember the trend is your friend when making short term predictions. 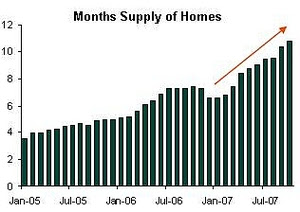 This is based on the absymal October home sales data and for anyone who wants to call a bottom, Calculated Risk is doing some depressing data crunching by making the assumption that the trend and long term historical norms still have some relevance in predicting the intermediate term future and that the New Paradigm in housing is really nothing new...

the annual variability in the turnover of existing homes, with a median of 6% of owner occupied units selling per year.

Currently 6% of owner occupied units would be about 4.6 million existing home sales per year. This indicates that the turnover of existing homes - October sales were at a 4.97 million Seasonally Adjusted Annual Rate (SAAR) - is still above the historical median.

There is still a good way down for the US to start returning to trend in the housing market which means construction employment is going to take a significant hit, especially as non-residential investment is now slowing down as a near substitute of skills, which means the basic activity multiplier effect of construction jobs will take out a bunch of other jobs, which will feed into both worsening credit capacity and credit maitenance which means more foreclosures and more pressure on housing, all in an environment where very few people have easily tappable, liquid and reliable reserves.
Posted by fester at 11/28/2007 02:24:00 PM