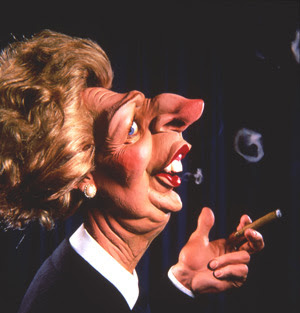 Peggy Noonan has a story for you:

The story as I was told it is that in the early years of her prime ministership, Margaret Thatcher held a meeting with her aides and staff, all of whom were dominated by her, even awed. When it was over she invited her cabinet chiefs to join her at dinner in a nearby restaurant. They went, arrayed themselves around the table, jockeyed for her attention. A young waiter came and asked if they'd like to hear the specials. Mrs. Thatcher said, "I will have beef."

Yes, said the waiter. "And the vegetables?"

"They will have beef too."

Too good to check, as they say. It is certainly apocryphal, but I don't want it to be. It captured her singular leadership style, which might be characterized as "unafraid."

She was a leader.

The story isn't just apocryphal, however. It is actually a sketch from the satirical political comedy show "Spitting Image". The show used latex puppets to poke fun at political events and celebrity figures. It was maybe "too good to check" - but it's a very easy one to check should someone be inclined to. Just ask any Briton alive now who was aged over 16 in the 80's. It was the single most popular comedy show of its time.

The sketch in question, along with others which showed Thatcher dominating her cabinet, was aired shortly before the Conservative party decided not to back Thatcher for a new term of leadership. In the UK, the show was widely credited with making it impossible - at the risk of confirming the show's allegations of being Thatcher's lickspittles - for senior party figures to back her.

So no, Peggy can't use the show in general or this sketch in particular to claim that Thatcher was a leader either. It showed her as a tyrant madwoman who used the men's restrooms in the Houses of Parliament, stood up to pee, and had wildly sexual dreams about Reagan.

So this "apocryphal" story that isn't even that much shows what, exactly, about Hillary Clinton? Well...bugger all, to be honest.