More on the 2007 Pittsburgh Mayoral Race

I'm interested in the Pittsburgh political patterns and groupings, specifically the seeming overlap between progressive activists and swing voters in local county and municipal elections. Chris Briem of NullSpace has been extraordinary gracious in supplying me with the data sets that I'll be playing with over the next couple of posts. If anyone wants the spreadsheet, leave a comment or e-mail me.

Let's get started with some basic descriptive information on how Republicans fare in the city of Pittsburgh. The short story is not well, but there is some variance that may be interesting. 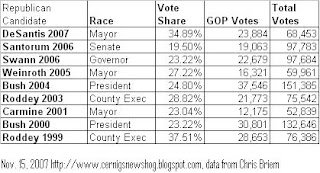 DeSantis did slightly worse than Jim Roddey did in 1999 when he was able to keep the loss close enough in Pittsburgh to allow his suburban edge to beat Cyril Wecht for the county council. Otherwise DeSantis significantly overperformed all other Republicans. Turnout on first glance does not have a massive influence here as there is a significant gap between 2007 DeSantis and the next best, 2003 Roddey, and even more of a gap with all other Republicans running in the city at low, medium and high turnout elections. If anything the GOP does slightly better in medium turnout elections in the city. 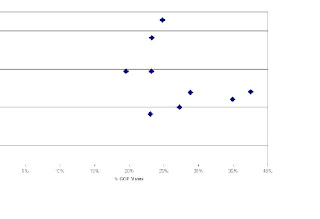 Chris Briem noted that the DeSantis vote distribution and totals have a strong echo in previous races; notably the 1999 Allegheny County Executive race between the winner and Republican Jim Roddey, and Democrat Cyril Wecht.

If you compare the election results to past races in the city, there is some clear analogy to between last weeks results and the 1999 race for Allegheny County executive. At least within the city the % Roddey sure looks similar to the % Desantis. That Roddey-Wecht race was amazingly close overall....Well, the difference between 1999 when Roddey beat Wecht and 2003 when he lost to DO was impacted a lot by the clear loss of voters in the City's East End, specifically Shadyside and Squirrel Hill....

Bush and Santorum vote shares are highly correlated, which I think is a no duh moment. A Santorum voter is most likely a Bush voter while the converse is a bit weaker. However I think this explains a decent bit of the GOP voting base in the city and it could hint at the potential advantage or at least smaller disadvantage GOP candidates have in the city in low to medium turnout elections where the marginal base member is not being turned out for the Democrats.

Okay, I have to get a couple of more things done before I can keep on writing, but one last tidbit, the DeSantis vote shares by precint had a .72 correlation with the Weinroth vote shares, and a .52 correlation with 2001 Carmine. These are the past two GOP mayoral nominees.
Posted by fester at 11/15/2007 07:35:00 AM