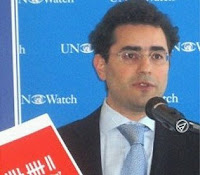 Welcome to BushAmerica. A nation built on fear and caught in the grip of a slow motion panic attack. In case you needed more clues on why foreign tourism is down...

The man arrested at a Needham pizzeria Friday leads a human rights watchdog group, has penned op-eds for international newspapers and delivered a scathing and widely publicized address on Israel before the United Nations earlier this year.

Hillel C. Neuer, 37, who lives and works in Geneva, Switzerland, was cuffed after an hourlong standoff with police when jittery pizza shop workers thought they spotted him with a gun. No gun was found. Neuer was charged with disorderly conduct.

I don't know what the hour long standoff is all about but this is what the politics of fear and hate has wrought. Suspicion and panic. To be fair, there was a murder in the town and the killer was still at large but this is the "strange behavior" that sparked the overreaction.

“He was just really nervous when he came in talking to me. He said, ‘I want you to get me a cab.’ Right after that, he got up, went to the bathroom to change and came back with new clothes on,” said Dante Rogers, 24, of Needham.

Rogers said Neuer emerged wearing a blue suit and tie, sat down to eat his pizza, took one bite, then left and ran next door to CVS. Rogers said he was in the back making himself a pizza when Neuer returned and someone screamed.

“Someone yelled, ‘Gun. Gun. Gun,’ ” Rogers said. “Everyone was on the phone with 911. He saw the cruisers and he dove behind the tables and I ran out the back door.”

So this behavior was alarming because brutal killers normally wander around at the scene of the crime with several bags, nervously order pizza and ask for a taxi? Certainly the more plausible explanation was that he was a traveling businessman late for an appointment.

I imagine he spoke with an accent. He looks Middle Eastern. Was it really simple jitters? Would they have panicked if the man was an attractive Nordic looking sort? I think not. The fear of terrorists has been so successfully embedded into the population by the White House that every act of domestic violence is immediately seen as a terrorist attack and every stranger who looks vaguely Middle Eastern is a suspect.