According to The Swamp, Majority Leader Steny Hoyer will move to table Dennis Kucinich's to impeach Cheney on the basis that it would split the Democratic Party.

"[House Speaker Nancy Pelosi] and I have both said impeachment is not on our agenda," Hoyer told reporters. "That does not make a judgment on that issue."

Kucinich, who is running for the Democratic presidential nomination, has gathered 21 co-sponsors for the articles of impeachment that he first introduced in April. Seeing war with Iran on the horizon, the Ohio congressman now plans to reintroduce the measure this afternoon as a privileged resolution.

Kucinich alleges that Cheney misled Congress and the American public into the war in Iraq, and is trying now to mislead lawmakers and voters into a war with Iran.

"The Vice President is cherry-picking intelligence and selectively using facts in a manner that does not portray the complete picture," Kucinich said today in a statement. "The best option to prevent an unnecessary war with Iran is to impeach the Vice President, the lead cheerleader of the war."

Hoyer did not address the substance of the measure.

Hoyer has backing from House Judiciary Committee Chairman John Conyers who said ""If the speaker were to let this thing out of the box, considering the number of legislative issues we have pending, it could create a split that could effect our productivity for the rest of the Congress."

Like Republicans' recalcitrant, peevish obstructionism and a White House with a newly discovered fondness for the veto weren't already ending productivity already. Honestly, do any of these spineless clowns think they're going to be allowed to produce anything except rubberstamps for Republican wars while Bush and Cheney are still incumbents? Do none of them care that they're enabling criminals - not just to escape justice but to continue running their country?

Update For once, I agree with Captain Ed's conclusion on the Mukasky nomination (if not how he gets there). It fits perfectly to this issue too:

this exercise just confirms for the Democratic Party base that their Congress has assumed a mostly-supine position vis-a-vis George Bush. What an absurd piece of political theater. As Casey Stengel once said of the Mets, can't anyone in the Senate Democratic caucus play this game?

Update this one's an all-round victory for the Republicans. not only did the spineless wimp Hoyer indeed moved to table the resolution - and then got a shock as, half-way through the vote, Republicans started voting to force a debate and show up the spineless Dem reps for what they are - wimps without the courage to stand up for their convictions.

Midway through the vote, with instructions from the GOP leadership, Republicans one by one changed their votes from yes — to kill the resolution — to no, trying to force the chamber into a debate and an up-or-down vote on the proposal.

At one point there were 290 votes to table. After the turnaround, the final vote was 251-162 against tabling, with 165 Republicans voting against it.

Democrats countered by offering a motion to refer the proposal to the House Judiciary Committee for further study, effectively preventing a debate on the House floor. That motion passed by a largely party-line vote of 218-194.

where it will be quietly sunk without trace.

Cue massive hilarity and much back-slapping from Republican circles for making the Dem leadership jump through hoops so easily. As Captain Ed said earlier, "can't anyone in the Senate Democratic caucus play this game?"

Only 84 Dems voted against tabling then. I would like to thank them for some gumption on this issue. I'd also like to endorse Kevin Hayden's idea that the netroots "muster a chunk of change for Kucinich to send a message of approval to our Congressional leaders".

Update 2 I just have to share this graphic, via Matt at Comments and originally from Democracy In Action. Says it all. 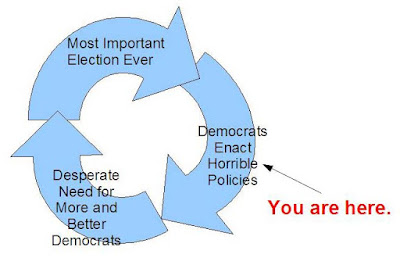