More On Those Charts

The only hard data Gen. Petreaus offered in his prepared testimony to Congress yesterday came in the form of charts (PDF file). In particular his graph of "Overall Weekly Iraq Attack Trends" (page 3) contains a lot of data - presented in such a way as to be utterly obfuscatory and misleading.

But, if you print out the graph and blow it up, then with a ruler and a pen and some time you can eventually abstract some rough raw data - I say "rough" because even then the Petreaus chart is designed to be confusing and hide the figures under noise - which can then be compared to his other charts.

That's what I did with the numbers for "Bombs (IEDs) Both Found and Exploded" from that chart. A comparison with the chart for "Improvised Explosive Devices (IEDs)" which includes figures for "IED explosions + IEDs found + IED Hoaxes" (page 7) is instructive. 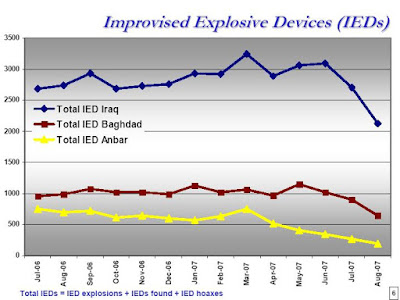 John Cole and Kevin Drum both wondered what the chart on page 7 would look like without the IED hoaxes. Well, the raw data in the first chart doesn't include any hoaxes, so...

It would look something like this for Iraq as a whole. 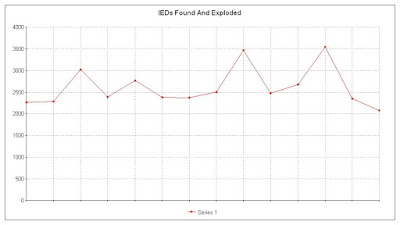 Or if you prefer it as a bar chart, like this: 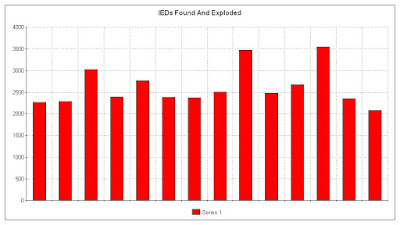 But for sake of fair comparison, let's show it as a graph of weekly figures too. 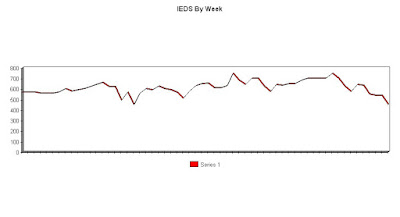 But what the by-week figures reveal is that there were more actual IEDs found or exploded in the seven months of the Surge to-date from Feb '07 onwards (about 19,000) than there were in the preceeding seven months (about 15,000).

The level of actual IED's is pretty constant, there were periods last year when the number of IED's dropped as low as they are currently. Violence always drops off a bit in the hottest late-summer months and we'll have to wait and see if the number of IED's will rise again from the current seasonal low before it can be said with any certainty that the Surge has reduced IED attacks. Any variations can be attributed to seasonal variations in attack patterns and the U.S. military getting more discerning about hoax calls.

P.S. You'll notice that my abstracted figures for a couple of months are somewhat higher than the all-Iraq figures on Petreaus' page 7 chart. Partly, that's what I mean by noise - and partly it may be that the preparers of the Petreaus chart are hedging around the fact that some months are five, not four, weeks long. That's why I've included the weekly chart.
Posted by Cernig at 9/11/2007 04:52:00 PM