I am riffing off of Blake Hounshell of the Foreign Policy Passport blog on the means of analyzing US casualty and fatality figures for July 2007. Total coalition fatalities have declined month over month with June seeing 108 total non-Iraqi uniformed military personel dead while July saw 87 total non-Iraqi uniformed military personel. All figures are from Icasualties.org and access on Aug. 1, 2007.

This got me thinking about the seasonality and year over year trend data. I chose to look at total coalition fatalities as the British are absorbing combat fatalities at the same or greater per capita rate as US combat formations. The first graph is the average monthly total coalition fatalities from all causes from May 2003 to July 2007. I excluded March and April 2003 as that combat was state v. state combat instead of a multitude of insurgencies. 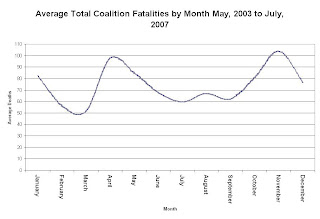 First observation is that there is some pretty strong seasonality that is roughly correlated with decent weather. High casualties have occurred in April and November multiple times because that is good campaign weather --- rain is not that bad, the heat is not that bad and the dust storms are low probability events. These are the months of the heavy fighting in Fallujah and numerous brigade and division size sweeps. If you exclude the two battles of Fallujah in April and November of 2004, the seasonality is reduced but still present. 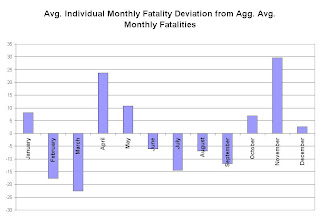 A little bit different look but again the same pattern, early spring and late fall show above average fatality rates. We should expect a drop in fatalities during the crappy weather seasons. 130 F heat counts as crappy weather in my book.

The final graph is an examination of year over year total coalition fatalities sorted by month. 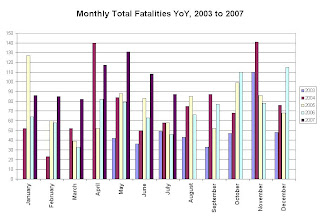 This is a bit busy for a graph, but all seven months of 2007 have seen higher total coalition fatalities than their corresponding month in 2006. Five of the seven months have seen their war to date maximums in 2007.

Just pulling some of this data, and acknowledging that it is a bit broader of a data set than being discussed elsewhere, I have to conclude that Iraq is getting more violent seasonally adjusted today than it has been in the past, at least when examining foreign military fatalities.
Posted by fester at 8/01/2007 03:38:00 PM