Confederate Yankee this morning has a picture provided by Multi-National Corps-Iraq which purports to be of Iranian explosives seized in Iraq. 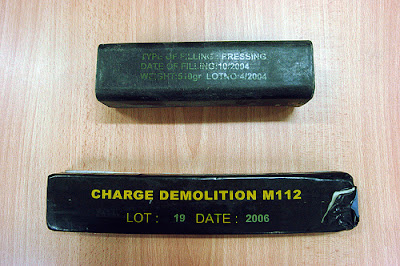 The Yankee accepts this provenance without question, but I think there are good reasons to look twice at it. Not least that the picture's C-4 block looks uncannily like the standard US-military issue M-112 Demolition Charge.

The U.S. military's explanation is that they know the explosives are Iranian because the telltale chemical trace additives that every nation puts in its explosives as a marker point to Iranian origins.

Possible, I suppose so. But I would want the U.S. military to release the chemical data for scrutiny and have an independent lab analyze some of the stuff and confirm it before I'd seriously entertain such a possibility.

Especially since Iran hasn't made such elementary mistakes of tradecraft in the past. As Former CIA field officer Robert Baer explained to Time magazine in April:

In April 1983 an Iranian surrogate group blew up the American embassy in Beirut. Forensic investigators sifting through the rubble determined with a fair amount of certainty that the bomb maker had inserted explosives inside the firing chain, ensuring a "signature" was not left to tie the attack to Iran. Iran never claimed the attack, the suicide bomber was never named, and if it weren't for a still classified lucky break, we would have had no evidence the Iranians were behind it. It is unlikely in the intervening years Iran lost its touch. It certainly isn1t clumsy enough to leave serial numbers or factory markings on weapons going to the Sunni insurgency.

There are good reasons, it seems to me, to be sceptical about the current narrative.

Of course, the other possibility is that the U.S. military just sent a picture of one of their own blocks of C-4 along with a cock-and-bullstory they knew the cheerleaders would accept and the media wouldn't look too hard at. Whether you find that explanation more compelling will depend on whether you trust the U.S. military to tell the truth in all things. Their record isn't good.

Update Multi-National Force - Iraq has also released a pdf of a slideshow briefing which shows "proof" that an alleged Hizboullah agent and two rogue Mahdi leaders were conducting attacks on Coalition forces which were backed, planned and funded by an Iranian Quods force "Special Group" (including, allegedly, the attack at Kerbala). Here it is. See what you think. The briefing was conducted by spokeman Brigadier General Kevin J. Bergner, who was sent to Iraq three weeks ago and until then was "Special Assistant to the President and Senior Director for Iraq", something no-one in the mainstream media is mentioning for some reason. One thing I noticed - that Hizboullah agent obviously lugged a laptop with him while he was roughing it around Iraq, because his journal, which helpfully details every attack, is bullet-pointed and printed.

Update 2 One of Confederate Yankee's commenters provided a pdf with a picture of an actual U.S. military M-112 explosive charge in a P.R. release by their manufacturer. The lettering on the wrapping -at least of the side pictured -is different and it's a bit longer although the original pic looks like the block may have been cut down some. Nor does the one in the P.R. picture from the manufacturer have a "lot number" or manufacture date - is that usual for U.S. explosives or is it different because it's a P.R. pic? They aren't identical, though. Now - can anyone explain why Iran would have the same nomenclature for its charges as the U.S. military? Is it perhaps an item made deliberately for export? In which case, private enterprise black-marketeers are a sufficient explanation for its presence.

This was, at the end of the day, the point of this post. Don't just accept the provided evidence blindly - check and question and if possible verify. If the mainstream media had bothered to do that last time the intel blokes were adding 2 and 2 to make 5 and coming up with a big, scary conspiracy theory, there wouldn't have been anything like a narrative to invade Iraq.

(And Dan Reihl, in his haste to pour scorn on healthy, enquiring scepticism, misses the point entirely and points to the U.S. patent application for the process that makes C-4 block, a hard substance, malleable so that it can be made into charges - as it actually is both in the U.S.-made M-112 and the charge allegedly made in Iran. "Silly and misinformed" indeed, Dan.)
Posted by Cernig at 7/03/2007 09:13:00 AM