John Edwards - the man and his party

It was a tough choice on Sunday afternoon, lounge poolside or go to John Edwards birthday party? The weather was perfect for the pool, so I wavered until the last second but in the end I jumped back in the shower at 3:30, chopped two inches off my hair, grabbed my camera and took my new power bob to Chapel Hill for the fundraiser. I figured it was worth the couple of hours and $15 bucks to see the campaign in action.

I'm not supporting anybody in this race yet but I'm interested in Edwards. Despite his shaky numbers, I still think he's a contender. The party reinforced that view. I've worked on a lot of campaigns, including a stint in the top tier of Robert Reich's gubernatorial bid for governor of Massachusetts and John Olver's initial run to replace Silvio Conte. I've learned that you can tell a lot about a candidate by looking at their organization and the way they interact with their team. Edwards left me positively impressed.

The event was really well organized. The crowd was having fun. They had a really good bluegrass band who played at the perfect volume, the volunteer staff was helpful, they didn't run out of food and the security for the most part wasn't overly heavy-handed.

I did have one bad moment with a couple of guys at the very end when I was cutting through the insider tent to get around to the other side of the crowd. After having spent most of the event backstage, unchallenged, I found myself between a little guy nominally in charge of security and a great big guy who looked about ready to physically restrain me for wanting to duck under the flags instead of walking all the way around. Fortunately, I was immediately rescued by the press guy and I ended up meeting their blogging co-ordinator.

Frankly, I wasn't that impressed with her, she didn't seem to know much about Blogtopia, but I was knocked out by Ellis Roberts. 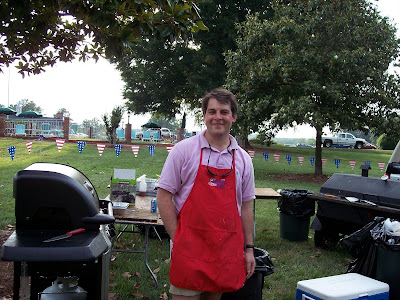 Ellis is a local guy, and a friend of the family. He's been working with John since around 01 or 02 when he interned in the Senate office. He was pressed into service at the barbecue station for this gig - he owns the pig cooker in the photo. I didn't have any myself, but he must have done a good job since nobody lynched him. They do take their barbecue seriously down here.

He's an intelligent, articulate and personable young man, very straightforward, who is clearly going places. It speaks well of the candidate that he could keep his loyalty and enthusiam for so many years.

As for John Edwards himself, I've posted about his style and his supporters, along with more photos at my place. But I'll repeat here that I was really impressed with the way he engaged with his volunteers and his supporters. 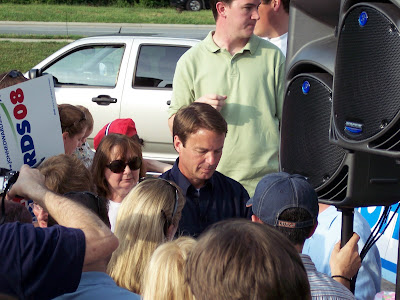 I took this shot after he had been doing the meet and greet for over an hour and he was was just as attentive to the stragglers as he was when the media's cameras were rolling.

I was even more impressed with Elizabeth, who I spoke to briefly. She graciously posed for this shot. 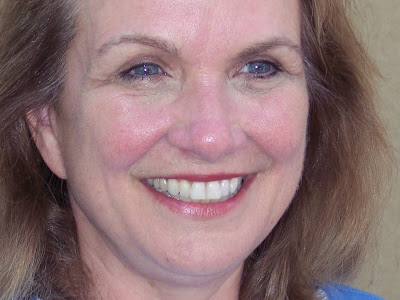 This is a gorgeous woman, an extraordinarily brave one and an incredible wife. She's going through a difficult stage of chemo, but she pitched in like a trooper. She gave a great introduction and came out again later to deflect some of the crowd from John at the meet and greet.

She's unequivocally an asset to John's candidacy. She has a casual elegance about her, yet she's unpretentious and inclusive in her interactions with the public. But I was most struck by her air of serenity. She looks and feels like someone at peace with their mortal soul. I still haven't decided about her husband, but I think she would make a great First Lady.
Posted by Libby Spencer at 6/12/2007 08:40:00 PM