Is America ready for a trophy wife as First Lady? 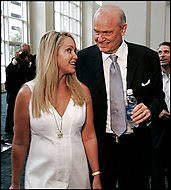 Fred Thompson made a big splash at a recent fundraiser. Of course, being a professional actor, he delivered his lines perfectly, but didn't say anything particularly noteworthy. As the WaPo reports, "Thompson managed to hit most major conservative themes in his 35-minute address."

It was the usual stuff, an increase in defense spending, the "battle between the forces of civilization and of evil," those damn liberal judges, and the obligatory anti-immigration bill remarks. And he evoked the usual GOP heroes and painted himself as a DC outsider. A neat trick for former Senator who made a killing as a lobbyist when he left office but I guess that's why he's such a successful actor.

But what really struck me about this piece was the photo. If you didn't know, you would think it was a father and daughter, well except for the slightly lecherous look in his eyes. It's clear he's proud of his beautiful young wife, who is actually four years younger than his real daughter.

I don't have a problem with the age difference. I know of many successful May-December marriages, but I do find it distasteful when a man dumps his wife of 25 years in order to trade-up to a wife that looks better on his arm, which appears, acording to rumor, to be the case here. And yes, I know that he played the field for a while in between and Jeri had to "catch" him, and maybe the wife even kicked him out for all I know but it's difficult to deny that Jeri looks like the classic trophy wife.

Even assuming they fell crazy in love and just had to be together, it's somewhat jarring to see them together in the photo. She looks so young, you expect that she signs her name with a little smiley face instead of a dot on the "i" at the end. In studying that shot, I couldn't help but think if Fred has been dating her only a few years eariler it would have been considered a sex offense [see update].

I tried to imagine the photo-ops if Fred became president. The traditional family photo where the step-children look older than the wife. The state visits where the First Lady's blushing youth makes the other wife look like an old hag in comparison. I know it's not unprecendented; Grace Kelly and Queen Noor come to mind immediately, but nonetheless it struck me as awkward with the potential for some embarrassing moments.

But maybe it's just me. Maybe I just never got over being dumped for a trophy wife myself.

Update: I suppose I should have researched this a bit more before I posted my initial reaction. A google search turns up the facts and I have to retract the crack about sex offenders. I misread her age in the initial report I read about her -- I plead dyslexia and failing eyesight on that -- and didn't realize she was forty. God bless her. She looks much younger than that.

But I'm not conceding the trophy wife point even though Fred was divorced in 1985 and didn't marry her until 2002. I'll give him credit for not just jumping straight into the arms of matrimony with the first available beautiful babe, that shows some class and it's less insulting to the wife that way, but he still divorced her after 30 years of marriage during which she worked to put him through school and raise his kids. Interestingly, the year he divorced her is also the same year he made the big breakthrough with his first movie. A quick google search turns up gossip the marriage broke up over infidelity and the impregnation of a married woman.

Whether or not that's true, the circumstantial evidence certainly suggests he left the long suffering first wife when he made it big. That he catted around for 17 years before he let himself get caught by Jeri, doesn't really make her less of a trophy wife -- just a deferred one. As a movie star, he didn't need a wife right away. He had groupies.

I don't think any of that will hurt him with the GOP's base, but I'm betting he's lost the vote of every woman who has been dumped for a younger model. Unqualified Offerings agrees and then some.

Update Two By Libby: Since this post generated more response than I expected, and it's getting a little long, I've answered my many critics in a new post.

Update Three By Libby: My reponse to Dr. Helen and Don Surber is here.

Update By Cernig Conservative pundits are awfully fond of claiming that Republican women are prettier than Democrat women - there's a rather infamous poster that did the rounds back in 2005. They can hardly complain, then, if people take them at their word and suggest they may be more interested in looks than brains or personality.

Update By Cernig Talk about pouring oil on the fire - uber-conservative talk show host Joe Scarborough asks if Jeri thinks she is a stripper...

Captain Ed says: "This is nothing more than character assassination, and especially egregious as it targets someone who isn't even a political player." The first part of that sentence is true - although I've known strippers who were highly moral women and conservative apparat-chiks who would lie at the drop of a hat - but the last part is sheer spin. Jeri has been involved in the GOP party machine for years and works for the biggest K Street lobbyist. She's clearly a political player.

Update By Cernig In the interest of fairness, it should be pointed out that Democratic nomination outsider Dennis Kucinich also has a wife who is far younger than he is. His English wife Elizabeth is also far taller! Here's a sorta-bio the London Times did a while back. 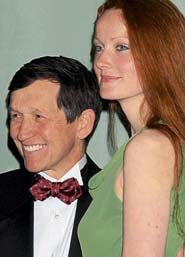 Wonderful beat ! I wish to apprentice even as you amend your web site, how could i subscribe for
a weblog website? The account aided me a acceptable deal.
I had been tiny bit acquainted of this your broadcast provided shiny
clear concept
Feel free to surf my blog post : Young teen Hatefucked hard by big cock - Videos

Hi,
I read your article, you’re describing of expression is excellent and the most valuable thing is, your attracting topic declaration. I really enjoyed and great effort. The points covers in the blog are awesome. Great to read your blog and thanks for this valuable information.
Hard and long cock pump