Decentralization of the drug trade

Tequila over at Tubestroker is linking to the Christian Science Monitor's summary of the International Crisis Group's thoughts on what to do about poppy production, and the black market economy fueled by opiate production in Afghanistan. He reviews the options and summarizes the ICG's recommendations as the following:

Long experience with the drug trade in South America shows that points 1 and 2 are achievable. The last three, however, are typically forgotten and yet the most critical to long-term success. That’s why Plan Colombia has been a failure -

Even if points 1 and 2 are achievable, is there an actual impact on the quantity, quality or the price of drugs available in the main consumer markets? If there is a change, then these policies may be worth pursuing. If there is no significant change in a positive manner, then these policies are not worth pursuing. Using South American cocaine as the primary example, we can look at some of the trend data to ask about the impact of going after high level traffickers and large scale networks.

I am using the 2003 White House Drug Policy Price/Purity report for data. When the data for the report was collected, the United States had been embarked on a multi-decade campaign against large scale international smuggling AND identifiable large scale cartel leaders. The time period should provide a useful data set to see if actively campaigning against these two nodes in the distribution and consumption networks would severely crimp the network's ability to supply high purity drugs at ever decreasing prices to a wider audience. 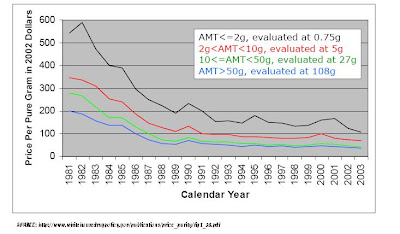 On the drugs that the United States has spent the most money and effort to dismantle the centralized cartels and smuggling networks, the long term trends have been that these efforts have not been able to put a sustained tax much less blockage of the flow of drugs into the United States. This is despite the fact that the United States is minimally involved in any guerrilla wars, and has the cooperation of governments with significantly more local power, reach and competence than the government of Afghanistan.

If it is true that the efforts to go after identifiable cocaine leadership cadres and smuggling networks can only produce tactical successes that can not overwhelm strategic failure, then I question whether or not it makes sense to replicate this strategy in Afghanistan.

The major drug smugglers and drug distribution leadership in Afghanistan are exhibiting a certain skill set towards organizing diffuse interests, mediating conflict in a criminal enterprise, gaining trust of locals and creating profits are skill sets that the United States could use. [h/t Zen Pundit. The drug economy in Afghanistan is not naturally allied with the Taliban. Instead, it has been a recent alliance of convenience as the drug economy buys protection from the Taliban against the United States and the Afghan central government.

This alliance provides the Taliban and other fighters in Afghanistan with significant cash flow. If this cash flow can be crimped or stopped, the Taliban becomes significantly less capable of conducting large scale combat operations absent any other factor increasing their support [I'm looking at you Pakistani ISI].

Furthermore, if the United States does adapt the policy of going after kingpins and the larger scale smuggling networks, the evolutionary response of these groups and individuals is to fragment and decentralize in a manner that make them harder to track, more resilient to infiltration and more likely to expand into new markets of smuggling and black market supply.