David Ignatius wants another pony despite the fact that he realizes that the only way that he'll ever see the first pony that he wished for is from the end of an Elmer's Glue bottle. This future pony will only be seen in the hospital cafeteria line served as multi-hued sugary gelatin desert.

President Bush and his senior military and foreign policy advisers are beginning to discuss a "post-surge" strategy for Iraq that they hope could gain bipartisan political support. The new policy would focus on training and advising Iraqi troops rather than the broader goal of achieving a political reconciliation in Iraq, which senior officials recognize may be unachievable within the time available.

The revamped policy, as outlined by senior administration officials, would be premised on the idea that, as the current surge of U.S. troops succeeds in reducing sectarian violence, America's role will be increasingly to help prepare the Iraqi military to take greater responsibility for securing the country.

This is a faulty premise on two practical grounds. Jim Henley passed along a recent New York Times article with an excellent graph on the pace of the insurgencies attacks against a variety of target sets. 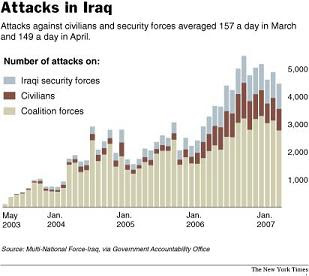 Just eyeballing the attacks aggregations, we can see that the escalation started in January and it looks like any local successes were merely displacements and the decrease in attack numbers were a combination of an seasonal dip or the Mahdi Army/JAM lying low and watching for a couple of months. Both of these events should have been anticipated as we have seen the winter dip for three previous years, and displacement to observation is a common guerrilla tactic.

Baghdad may or may not be any calmer now that the sectarian death squads have observed the US reinforcements and changes in strategy. These death squads are now running their operations and killing dozens of individuals in Baghdad per night, which is slightly below their pre-surge peak, but rapidly approaching that level of activity. However the violence is also transferring out of the city towards the surrounding provinces.

Yesterday Cernig caught the second major problem in the belief that the surge could work in producing peace. The level of 'success' is ridiculous. The Telegraph reports what the Pentagon would consider a successful indicator of 'national reconciliation:

"The evidence does not suggest that the surge is actually working, if reduction in casualties is a criterion. The figures in April were not encouraging."

Mr Campbell also disclosed that American commanders had decided that the criteria for the "success" of the troop surge would be nothing more than a reduction in violence to the level prior to last year's al-Qaeda bombing of the al-Askari Mosque in Samarra, which destroyed its golden dome.....

Casualty figures had been running at 800 a month before that, a level that few would regard as anything approaching peace.....

Dan Goure, a Pentagon adviser, confirmed that the use of the Samarra benchmark was common among military commanders. "If we get back to pre-Samarra levels, then that's a significant reduction in violence, especially sectarian violence, and will provide the momentum for further improvements."

So let us stipulate that magical ponies spring forth and by the end of next week the level of violence in Iraq is identical to the average weekly violence from say August 2005 to Feb. 1, 2006, the time period immediately preceding the Dome attack.

Guess what, Iraq was a failing state then at that lower level of violence.

Another year of heavy fighting and infrastructure destruction will not improve upon the strength and competency of the Iraqi state. Instead it has weakened it as David Ignatius notes that the Maliki government is a captive of the interests that put it into power which is to be expected. There is no cult of Tigris cocktail weenie bipartisanship or moderation as an end in and of itself in Baghdad. There are very few cocktail weenies available as that last resupply convoy got ambushed south of the city.

So even if we were to handwave two practical problems of the surge away --- the lack of a decrease in violence, and the pre-existing condition of the Iraqi government and political process, success will be a farce as the currently desired endstate conditions for this strategy are conditions that were sufficient for massive state and strategic failure anyways.
Posted by fester at 5/22/2007 06:25:00 AM