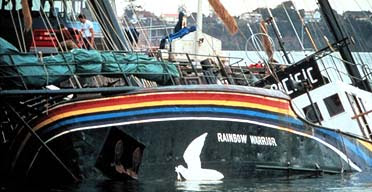 The Guardian today revealed that the ringleader of the French intelligence agents who sunk the Greenpeace vessel Rainbow Warrior in 1985 is now in Washington heading up a Belgian' arms firm's U.S. subsiduary and selling weapons to the US government.

The attack engineered by the French intelligence services on an unarmed ship docked in a friendly harbour - the Rainbow Warrior sank off Auckland, New Zealand - brought widespread criticism of the French government. A Portuguese photographer on the ship drowned after being trapped below deck. Two of the French agents involved in the bombing operation later served jail sentences for manslaughter.

However, Mr Dillais, an operative of the French external intelligence service DGSE who was identified by French media reports as the man who commanded the attack - codenamed Operation Satanique - was never brought to trial.

...He is now employed as an executive in the US subsidiary of a Belgian arms manufacturer, FN Herstal. According to the company website and industry publications, FN Herstal and its US subsidiary supply combat assault rifles to the Pentagon, handguns to the secret service, and sniper rifles to the FBI. The company also produces an underwater machine gun, and provides equipment to police departments across the US.

The subsidiary alone turned over nearly $2.5m (£1.25m) of business in federal contracts in 2005, according to FedSpending.org. The site notes that only $93,000 worth of those contracts were fully competitive.

...Greenpeace, which tracked Mr Dillais to Virginia, has launched a campaign demanding that the American authorities explain why he was let into the United States. The organisation wrote to the department of homeland security in September last year demanding Mr Dillais's deportation. US immigration regulations ordinarily bar people who have been convicted of a violent crime, or linked to acts of terrorism.

"We think the government should be setting a much higher standard on the people it does business with," said Mark Floegel, a senior investigator at Greenpeace. "It is amazingly two-faced to be buying arms from someone who is an admitted terrorist. He has not denied his role in Operation Satanic."

...Mr Dillais has acknowledged his role in the sinking of the Rainbow Warrior, telling a television crew from the New Zealand state broadcaster, NZTV in 2005: "I'm sorry for the loss of life," he told the station. "It was an unfortunate accident. I'm sorry for the family, but what can you do?"

Officials from the state department, the department of homeland security, the FBI and the French embassy would not comment directly on Mr Dillais's presence in the US, or whether he was at risk of deportation. However, US officials did say that anyone involved in an act of terrorism would not be welcome in America.

"The law is very clear: persons involved in acts of terrorism are not admitted into the United States," said Kelly Klundt, a spokeswoman for the customs and border protection agency.

Bill Carter, a spokesman for the FBI, said: "If an individual has been involved in terror-related activity and is in the United States than obviously that individual would be of interest to the FBI."

The Guardian goes on to point out that the Bush administration has talked more than it has acted in such cases, for instance that of Luis Posada.

I remeber the sinking of the Rainbow Warrior - an act of war as well as an act of terrorism - very well. It made a huge splash in Europe at the time and the outcry probably led directly to the French finally stopping nuclear testing in the South Pacific.

That the Bush administration could happily allow this man to work in the US, and buy arms from him, is frankly disgusting to me, as it will be to many Europeans.
Posted by Cernig at 5/25/2007 03:48:00 PM