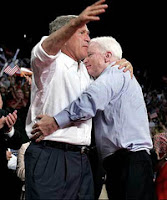 If you still harbored any doubts that McCain's candidacy is toast, his op-ed in the Washington Post should remove those. Poor old Johnny just doesn't get it. Running on a more war platform is not going to cut it. The op-ed is simply pathetic in the depth of its cluelessness.

Just looking at the high points, of course he had to address his disastrous presser at the Baghdad market.

Today the market still faces occasional sniper attacks, but it is safer than it used to be. One innovation of the new strategy is closing markets to vehicles, thereby precluding car bombs that kill so many and garner so much media attention. Petraeus understandably wanted us to see this development.

We all understandably wanted to see this development. Perhaps McCain just didn't see the news report about the 21 market workers that were killed just outside the barriers the day after he made his market photo-op stop. This is not progress by any metric I know.

He then merrily skips on to the "encouraging" signs of success.

Sunni sheikhs in Anbar are now fighting al-Qaeda. They're been saying this for much more than four months now. As I recall, a while back they declared AQ all but vanquished from Anbar. Funny thing is they keep coming back. And now they have chlorine bombs.

More than 50 joint U.S.-Iraqi stations have been established in Baghdad. Small units that have been made sitting ducks. We're also losing more soldiers than ever.

In the big denouement, McCain goes on to say we have a long, tough road ahead in Iraq. Does this sound like a surge strategy or a long term commitment to escalation to you? Because it sounds like a ten year plan to me.

Guntoting Liberal puts his finger on what really infuriates me about this deceitful spin.

If you will recall, our troops were ORIGINALLY sent into Iraq to topple Saddam Hussein from power in enforcement of United Nations Security Council Resolution 1441 (source: WikiPedia). This was accomplished many, many MOONS ago, folks. Congratulations to our brave men and women of the U.S. Armed Forces for their SWIFT victory and justice, which have been completely robbed from you by our neoconservative leaders, including the “Maverick” himself, who is STILL going around, charging that you have not yet finished your jobs. BOO, HISS, Mr. “Maverick”, President Bush, V.P. Cheney, Bill Kristol and the rest of you.

Exactly. The troops completed their stated mission that took us into this endless occupation the day they dragged Saddam out of the spider hole. Everything that's happened since then has been designed to solidify our occupation of a sovereign foreign country.

Bush supporters like to point out that the Iraqis want us there, but that's only true of the present government. They're making money on the occupation. But the average Jake on the street, they don't know what to think. They just want to be able to live their lives in peace. To be able to walk to the market without becoming collateral damage.

Surely redeploying our troops won't magically end the sectarian violence and it might indeed increase initially if we leave, but eventually it would end, just as it did in Vietnam. Our current support is only delaying the inevitable. Iraq belongs to the Iraqis, not George Bush and not John McCain. For good or bad, it's time they claimed their sovereign rights. Americans are getting it. McCain isn't.
Posted by Libby Spencer at 4/08/2007 07:21:00 PM