They Expect You To Believe THIS 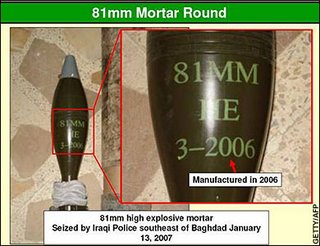 Consider this as an update to the post below.

The UK's Daily Telegraph released one of the pics from the US provided disc from today's "briefing".

It shows an 81mm mortar round with ENGLISH, not FARSI writing on it.

The neocon Tale-graph's caption, unbelievably, is "A photo of a roadside bomb released by the US military today. The US claims the device was made in Iran for insurgents in Iraq."

Sean Paul at The Agonist, recently returned from a trip to Iran, has this to add:

...Couple questions spring to mind first: is this pattern of numbers to be found on other similar weapons, made by other countries? This Russian 82mm has the markings etched in Russian. Are we sure that the Iranians use the 81mm round? Just in case I really embarrass myself by asking a tremendously stupid question, let me just add this (consider it troll repellent): there are no stupid questions. The only stupid questions are those not asked. Otherwise how are we supposed to learn. Markings on the Zelzal [missile] are in Farsi. [Example here - C]

UPDATE One of Sean Paul's readers says the ordinance in the picture isn't from Iran. It's from PAKISTAN. I've been saying that was a possibility for a long time now, as regular readers well know.

Update The guy who said it might be Pakistani is now rethinking that opinion, but feels the round could be any one of a number of copies of the common 81mm round from any number of nations. It could, to my untrained eye, even be a WW2 era U.S. 81mm M43A1 HE round, repainted. The US also still uses an 81mm mortar round family, some of which are made in the UK and some made to a modified design in the US.

The BBC has since put up a companion report to their earlier one which says:

On a table to their right was laid out the evidence. Weapons components, including two rocket propelled grenade rounds, mortar rounds and the unusually-titled Explosively Formed Penetrator or EFP. They could be traced to Iran, we were told.

With no detailed military knowledge, it was impossible to verify the claims - that is why the explosives expert was there.

He went into some detail to explain why a mortar's tail fin was of a type only known to be produced in Iran. He told us that a sophisticated machining process was required to manufacture the metal liners of the EFPs. This had previously been traced to Iran. The capability for such a process had not yet been seen in Iraq.

Well, the bit about the liners is simply BS, and you will notice that, after spending so much time explaining why the tail-fin on the mortar round proves it is Iranian the picture the reporters were given to take away is positioned and composed in such a way that the tail-fin is the very bit not shown...

Update It's confirmed at least that Iran produces an 81mm mortar round. Here's the actual 81mm HE round from Iran's Defense Industries organization. The stencilling on the body is of a very different form but that may not mean much.

No, it's the "distinctive" welded steel eight-fin tail unit of the Iranian round that's supposed to make identification possible according to the US, and the pic the US provided doesn't show the tailfin.

Next question: Has anyone seen any other pics from the U.S. disc yet, or is the one above the only one media outlets are using? Answer: Have a look on the sidebar of this LA Times article for a gallery of 6 pics from the US provided disc. See what you think.

Update Shockingly, Gen. Peter Pace, the Chairman of the Joint Chiefs and America's top soldier, has told the Australian media that he was unaware of the briefing and refused to back its claims.

Update There are thousands of people now looking at these pics all across the internet. That's good. There are a lot of different opinions too. Which is also good - taking things for granted you've never thought about yourself is rarely a way to get good democratic government.

When you're done here, have a look at the alleged super-IED's and see what you think. One expert has already said "they look like they had been assembled in someone's garage...if EFP mines were being supplied by an outside source, you might expect to see somethng a lot slicker."
Posted by Cernig at 2/11/2007 04:41:00 PM