Question The Evidence As Well As The Arguments

It's pretty obvious from today's press conference that the Bush administration cannot prove a relationship between the Iranian leadership and weapons used in attacks in Iraq. Nor are their senior military officers going to back any such claims.

However, that is only half the argument. There are still plenty of questions to be asked over just how reliable and conclusive their actual evidence is. Take this for example. The two uppermost photos are of supposedly Iranian "professionally manufactured" Explosively Formed Projectile (EFP) devices from the Sunday briefing in Iraq. The lower picture is of a real "professionally manufactured" EFP, the U.S. military's SLAM3 device. 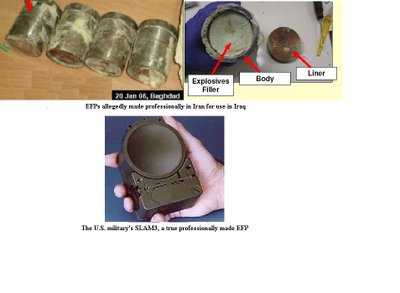 David Hambling, a recognized military expert, has this to say today at Defense Tech:

The pictures released last week of Iraqi high-tech explosives surprised me. These special 'superbombs' that have caused so many US casualties -- they look like they had been assembled in someone's garage.

...No doubt the Russians and Chinese have their own versions of SLAM, and these have probably been copied too. So you might expect a rougher, cheaper copy to appear in Iraq if it was supplied from the outside.

But as has been observed here, anyone can make crude and simple EFP munitions in a basic workshop. All you need is a lump of plastic explosive and a piece of copper. Shape the copper into a saucer, put the explosive under it, and you're there. Obviously this will be a lot less efficient, accurate and reliable than something like SLAM (optimal design of the the metal 'lens' is an art requiring a lot of computer power), but you can compensate by making it ten times bigger if you need to.

Maybe the insurgents should be given some credit for being able to build their own gear, or maybe there's more intelligence we don't know. But if EFP mines were being supplied by an outside source, you might expect to see somethng a lot slicker. (Bold emphasis is mine - C)

So this kind of evidence, or the kind of evidence where the administration says it has serial numbers but doesn't release those numbers for independent scrutiny - in fact the whole "secret squirrel" style of the alleged evidence - is not conclusive of anything very much.

If we allow the Bush administration to argue by innuendo and from insufficient evidence, using leading statements and poor logic, then we will be repeating the mistakes that led to the invasion of Iraq. Do we really want that to happen?

Update Iran does actually professionally manufacture a shaped-charge EFP device. Blogger is playing up right now so I can't get the picture to upload but have a look. It looks nothing like those photos from Sunday's briefing.

Update Sean Paul at the Agonist has some great commenters, and they are busy tracking down some possibilities. It can easily get confusing looking at the various weaponry types and options and trying to figure out which is which. Of course, that's what the Bush administration is relying upon.

One of Sean paul's readers points to this Asia Times article:

An article in Jane's Intelligence Review last month by Michael Knights, chief of analysis for the Olive Group, a private security-consulting firm, reports that the British discovered that there was indeed an organization in Basra engaged in arranging for the purchase and delivery of imported EFPs and that it was composed entirely of police officials, including members of the Police Intelligence Unit, the Internal Affairs Directorate and the Major Crimes Unit. They found that members of the organization followed no specific Shi'ite faction, but included members from all the factions in Basra.

...The EFPs used against US and British troops in Iraq were the centerpiece of the briefing. But the anonymous US officials did not claim that the finished products have been manufactured in Iran. Instead they referred to machining of EFP "components" - referring to the concave metal lids on the devices - as being done in Iran.

That position parallels the testimony by General John P Abizaid last March 16 to the Senate Armed Services Committee, which claimed only that "sophisticated bomb-making material from Iran has been found in improvised explosive devices in Iraq".

It also raises an obvious question: If Iran has the technical ability to supply the complete EFPs, why are only components being smuggled into Iraq?

The absence of shipments of complete EFPs suggests that the components that have been smuggled in have been manufactured in small workshops outside the official system. Knights, the most knowledgeable and politically neutral source on the issue, says these components could have been manufactured by a "small handful of external bomb-makers". He notes that the only source to claim that the Iranian defense industry is the source of the EFP components is the opposition National Council of Resistance of Iran.

The US briefers argued that EFPs are not being manufactured within Iraq. The New York Times quoted a "senior military official" as saying that they had "no evidence" that the machining of components for EFPs "has ever been done in Iraq".

But Knights presents evidence in Jane's Intelligence Review that the Iraqi Shi'ites have indeed manufactured both the components for EFPs and the complete EFPs. He observes that the kind of tools required to fabricate EFPs "can easily be found in Iraqi metalworking shops and garages".

He also notes that some of the EFPs found in Iraq had substituted steel plates for the copper lining found in the externally made lids. Knights calculates that the entire production of EFPs exploded thus far could have been manufactured in one or at most two simple workshops with one or two specialists in each - one in the Baghdad area and one in southern Iraq.

"I'm surprised that they haven't found evidence of making EFPs in Iraq," Knights said in an interview. "That doesn't ring true for me." Knights believes that there was a time when whole EFPs were imported from outside, but that now most if not all are manufactured by Iraqis.

There, that's the opinion of one of the world's foremost independent experts. How's that "evidence" looking now? And I knew the National Council of Resistance of Iran aka the Mujahedeen eKalq would crop up eventually. They're the neocons favorite terrorists.

Update Another sceptic, Andrew Cockburn in the LA Times:

PRESIDENT BUSH HAS now definitively stated that bombs known as explosively formed penetrators — EFPs, which have proved especially deadly for U.S. troops in Iraq — are made in Iran and exported to Iraq. But in November, U.S. troops raiding a Baghdad machine shop came across a pile of copper disks, 5 inches in diameter, stamped out as part of what was clearly an ongoing order. This ominous discovery, unreported until now, makes it clear that Iraqi insurgents have no need to rely on Iran as the source of EFPs.

The truth is that EFPs are simple to make for anyone who knows how to do it. Far from a sophisticated assembly operation that might require state supervision, all that is required is one of those disks, some high-powered explosive (which is easy to procure in Iraq) and a container, such as a piece of pipe. I asked a Pentagon analyst specializing in such devices how much each one would cost to make. "Twenty bucks," he answered after a brief calculation. "Thirty at most."

Stuff like this is why veteran journalist Charlie Reese writes about the Bush administration's tactics:

I notice that some of the television news outlets have already fallen into the administration's trap. In this case, the administration wants us to accept as fact that the weapons are from Iran but argue about whether they were sent with the complicity of the government. This is an easy argument for the administration to win, since the Iranian government is tightly controlled.

But the claim that the weapons came from Iran is not an established fact...The American people must be careful not to let this administration lead them into yet another war, this time with Iran, with the same kinds of deception it used to justify the Iraq War.

Perhaps the Iranians are supplying some weapons to Shi'ite militias, but the Bush administration has yet to prove it.