The Iranian news agency FARS has published a report about claims that recent attacks there were made using US made munitions and weaponry. You can read the full article at IraqSlogger:

Following a Saturday report about the use of US manufactured weapons in the recent terrorist operations in Iran's southeastern province of Sistan and Balouchestan, a security official provided FNA with a photograph of the said weaponry. These arsenals have been confiscated during a raid on the hideout of a terrorist group known as Jondollah in the provincial capital city of Zahedan on Thursday.

Here's the photo that accompanied that report. 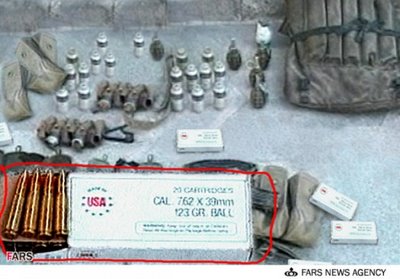 The folks at rightwing site Little Green Footballs have been busy as beavers all day debunking the picture. Deatils of their debunk include a flash presentation which alleges that some (though not all) of the munitions in the photo are photoshop clones. You can view the LGF post here.

I've a couple of comments.

Although initially racing off on a couple of false trails (a bit like myself and others tended to when looking at the U.S.' photographic evidence) the LGF commenters eventually produce a convincing case that all is not quite as it seems.

The ammunition boxes shown are -

just plain old Olin Winchester White Box ammo, it's not government issue, just made in the USA. It's the old style box that was used about 20 years ago, the current box actually says Winchester on the front instead of on the back. You can buy it at Wal-Mart.

which means it is widely available without implicating the US government. One LGF commenter boasts that he has more ammo lying about on his coffeee table. Some of the other items (e.g. grenades) seem past their current use in the US military too which means they are probably surplus.

The Iranians say they have confessions from militants captured after recent attacks that "they have been trained by English-speaking people". I trust such confessions as much as I would trust a confession after a Gitmo waterboarding - that is to say, not at all.

There is no reason to "assess" the US government as having knowledge and direction of either these supplies or the groups using them on the basis of what has been shown.

Which is exactly the correct assessment to make of US "proof" of Iranian meddling too.

Wouldn't it be nice to see all the competing claims and counterclaims subjected to the same standard of evidence - the forensic standard required by a capital murder trial, say - or simply written off as inconclusive if that standard isn't present?

But still, how amusing is it to see the LGF folks and other rightwingers race off on the chase of fake proof on this one when they swallowed the US briefing so readily? The Right jumped all over progressives who didn't trust the US "proof" but now are zealous to disprove Iran's "proof".

I would suggest that neither regime has established itself as a credible source who should just be trusted out of hand.

Although on that note I should point out that the Iranian "anonymous officials" sem more willing than their US counterparts to submit their "evidence" to independent scrutiny. The FARS report says:

Iran on Saturday invited international bodies to send envoys to Tehran to witness documents and other corroborative evidence showing involvement of foreign countries in recent terrorist blasts in the country's southeastern provincial capital city of Zahedan.

In the tennis match of claim and counterclaim which seems to be developing, if such corroberative evidence is presented correctly instead of in a super-secret briefing then the advantage would definitely be to Iran.
Posted by Cernig at 2/18/2007 03:34:00 PM