GnostiNews MultiTap - Are We Paying Attention Yet? 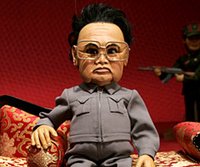 Just a quick note for today since it's going to be all you hear about for a while:

NEWSFLASH! - North Korea has the bomb.

Are you scared yet?

You're supposed to be.

Thanks to Cernig, I do actually check out memeorandum a few times a day. The link will show you just how many bloggers were going after your fight-or-flight instinct as of 1:05 AM CST today.

Today we're talking about a nuclear weapon. A nation killer. A world killer. And it's in the hands of a man whose sanity is suspect and is worshipped as a god by an army of over one million.

Korea is simply too small of a theater to be playing with nuclear toys. You can bet your britches that the far east paradigm just shifted, big time. Let the arms race begin...

So, being the shameless headline-chasing (and hugely outnumbered) humanist that I am, I'm going to put in my two cents:

To be honest, my first reaction was actually so what?

Being a selfish swine, I remembered that North Korea's recent IRBM missile tests really had not gone all that well, so the chances of America being hit are poor, at best.

I still think the chances of Northern MN being the target of Kim's are poor, at best. (North Dakota, on the other hand...)

The cynical 15/16ths of me wondered out loud if this was enough to pump even more money we don't have into the (truthfully) unworkable SDI program.

And, in the grand scheme of things, we only get one lifetime anyway, so enjoy at your own peril.

But, of course, then it was time to start checking some facts (or opinion, if you wish):

North Korea on Monday claimed it has performed a successful nuclear test, according to that country's official Korean Central News Agency (KCNA).

And, according to CNN via AMERICABlog:

UPDATE: CNN reports that the North Korean bomb probably weighs ten tons. And they have no way of delivering the bomb anywhere - their recent missile test was a flop, and at ten tons, it's not like they're going to drive it anywhere.

Ten tons. For a really useful nuke, you still have to read Tom Clancy, apparently.

The true blame for this incident can be spread around, as long as you remember that megalomaniacal l'il Kim is truly the prime suspect. All he wants is attention, and he's willing to starve and to kill the people of his own nation to get it in the international community. We could probably send a case of Hennesey and Anna Nicole Smith over to him and we'd all be better off.

BUT...the little idiot did release a tantrum to the media last Tuesday and it's contained in the same CNN article:

Citing American belligerence and pressure, North Korea said Tuesday that a nuclear test was in the works. A date and time for the test was not given.

Who would do that?

Of course, now is not the time for speculation, especially when we can simply remember a few things:

After Bush was reelected, new Secretary of State Condoleezza Rice launched an effort to revitalize the six-nation talks, which a year ago yielded a "statement of principles" to guide future negotiations, including the possibility of major economic help, security assurances and normalization of relations with the United States if North Korea dismantled its nuclear programs. To the anger of conservatives within the administration, the statement also suggested that North Korea might one day be supplied with light-water reactors as envisioned in the Clinton deal.

But that proved to be the high point of the talks. The administration issued a statement saying the reactor project was officially terminated -- and North Korea would need to pass many hurdles before it could ever envision having a civilian nuclear program. The Treasury Department, meanwhile, focused on North Korea illicit counterfeiting activities, targeting a bank in Macao that reportedly held the personal accounts of Kim and his family. Many banks around the world began to refuse to deal with North Korean companies, further angering Pyongyang.

With the end of the negotiating track marking the likely advent of sanctions, Pyongyang's action will test the proposition of those Bush administration officials who argued that a confrontational approach would finally bring North Korea to heel.

If you think that North Korea is a bully, you're partially right.

North Korea (l'il Kim) is more (and less) than a bully. He's got such a self-inflicted sense of insecurity due to being such a daddy's boy that he needs to lash out at the world and show what kind of power he's got, regardless of the consequences.

He could be co-operating with the world, but that would mean opening up the world for his people and losing the control that he has over them now. (Remember that I'm talking about l'il Kim here...)

And if the people had any say in what to do as a nation in North Korea, I would like to think that they would want to eat before investing any more money in a useless (and unreliable) weapons system.

Anyone think that ignoring him is the best route?

Believe it or not, that's how we got here in the first place.