The GOP's War On Workers 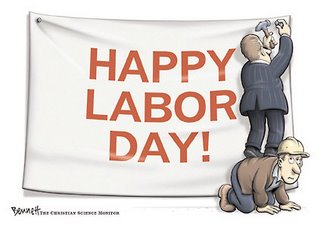 {Hat tip to The Moderate Voice for the pic}

David Sirota has the state-of-play this fine Labor Day:

U.S. Education Secretary Rod Paige labeled one "a terrorist organization." Former House Majority Leader Tom DeLay, R-Texas, called them "a clear and present danger to the security of the United States." And U.S. Rep. Charles Norwood, R-Ga., claimed they employ "tyranny that Americans are fighting and dying to defeat in Iraq and Afghanistan" and are thus "enemies of freedom and democracy," who show "why we still need the Second Amendment" to defend ourselves with firearms.

Who are these supposed threats to America? No, not Osama bin Laden followers, but labor unions made up of millions of workers -- janitors, teachers, firefighters, police officers, you name it.

Bashing organized labor is a Republican pathology, to the point where unions are referenced with terms reserved for military targets. In his 1996 article, headlined "GOP Readies for War With Big Labor," conservative columnist Robert Novak cheered the creation of a "GOP committee task force on the labor movement" that would pursue a "major assault" on unions. As one Republican lawmaker told Novak, GOP leaders champion an "anti-union attitude that appeals to the mentality of hillbillies at revival meetings."

The hostility, while disgusting, is unsurprising. Unions wield power for workers, meaning they present an obstacle to Republican corporate donors, who want to put profit-making over other societal priorities.

Think the minimum wage just happened? Think employer-paid health care and pensions have been around for as long as they have by some force of magic? Think again -- unions used collective bargaining to preserve these benefits. As the saying goes, union members are the folks that brought you the weekend.

...So when GOP lawmakers pledge their commitment to workers at Labor Day celebrations today, remember -- Republicans are waging a war on the very workers they purport to care about.