Iran is still asking for further negotiations over it's nuclear program, while insisting that it has a right to research under international law (which it does). However, the EU3 of Germany, Britain and France are adamant that there is no room for further talking and that they will ask the IAEA, in an emergency session on 2nd February, to refer Iran to the Security Council. The usual "unnamed officials think Iran is stalling. Rusia and China have refused to go as far as the EU3, and continue to advocate further dialogue while making placatory noises to both sides - something that probably has more to do with money than moral belief. The Arab world is pleading with the U.S. to show restarint and patience, with IAEA board member Egypt also putting Dick Cheney on notice that it will not vote for unilateral referral - any propsal it will vote on must also include Israel for contraventions of the NPT. But at the end of the day the other nations, even the members of the Security Council, are merely bit players because not only is the U.S. the driving force behind the Europeans but the Bush Doctine says that if America feels the need to do something then it can and should - even if that means flying in the face of international opinion and international law.

Meanwhile in the United States, the instigator of the narrative who refused to get involved in the negotiations, the unseemly rush to war continues apace. Prominent neocon media figures likeWilliam Kristol, Niall Ferguson and Michelle Malkin are leading the charge on behalf of the Bush administration, always with a "we don't want war but we must be prepared" caveat that quickly turns into "everyone but us is spineless for not wanting war" followed by "Why postpone the INEVITABLE!? LET'S LAUNCH MISSILES ASAP." (I should note that some conservative pundits are considerably more realistic - including The Glittering Eye blog who has an assessment I am most indebted to.) Of course, the hawks of the Democratic Party aren't far behind, chasing votes like ghouls chase ambulances. They remember how the patriotic fervor of Iraq bought Bush a Presidency and the GOP the Hill and don't want to lose out this time.

All of this simply combines to give the Bush administration some support for what it wants to do anyway. There are enough neocons in the administration to highly color it's policy and in any case they've already spent too much political and diplomatic capital trying to convince everyone that Iran is one of the nations covered by the Bush Doctrine, one of the "axis of evil". That means that, nuclear research or no, sanctions or no sanctions, united international front or ad-hoc coalition of the foolable, I believe there will at some stage be an attack on Iran even though it is "a very silly thing to do" as British First Sea Lord Sir Alan West noted last Friday.

In the 12th January edition of Jane's Intelligence Digest, the preeminent journal of all matters concerning military and intelligence afairs gave it's opinion of the year ahead for Iran:

In view of the latest moves to reactivate suspended nuclear programmes at Iran's Nantaz facility, there is an increased likelihood that Tehran will be referred to the UN Security Council in the coming months. However, JID also remains convinced that pre-emptive military strikes against suspected nuclear facilities in Iran during 2006 are a real possibility, with Israel likely to take the lead.

Israel has always been the favorite for a proxy attack on Iran, and has mentioned airstrikes before now. Given it's situation it's paranoia is understandable if misguided and the new acting Prime Minister, Ehud Olmert, is making highly belligerent noises.

Israel cannot allow in any way or at any stage someone who has such hostile intentions against us to obtain weapons that could threaten our existence,"

It seems unlikely that Israel has any more intelligence assets in Iran than the U.S. does, which means this aggresive stance is based on American assessments which are in turn based on the "findings of the MeK and biased by the neocon wish-list.

Were Israel to attempt a pre-emptive strike, then they could probably do it. It would require a surge by pretty much the entire Israeli airforce and would probably be led by their F15 long range attack aircraft. The strike would be co-ordinated by EC707 AEW aircraft and the shorter range F-16s in Israel's inventory could be refuelled in flight by it's eight tanker aircraft, giving them the legs to strike and return. Even so, a refuelling stop on the way out or a landing site closer to the targets would be a very handy thing, which is perhaps why there are rumors that Israel may attempt to gain use of three airbases in the Kurdish North of Iraq should it decide to strike.

Still, Israel would not have much left in it's pockets for a follow-on strike. It also has a major problem, as this map demonstrates" 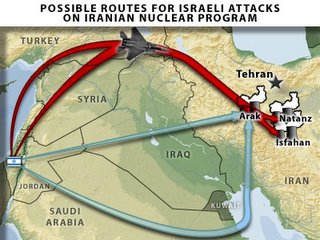 It cannot attack Iran without passing over at least one other moslem nation. Turkey would have been the most likely candidate until fairly recently, when relations between the two nations have cooled considerably. Supposing Turkey co-operated, it would force that nation out of the Moslem world entirely and into the Euro-sphere for good. That might seem desirable to neocon minds but the resulting destabilisation is impossible to predict fully and since it would doubtless at least lead to the downfall of the current Turkish government I think it's a non-starter. Even going back to those rumors of a staging base or three inside Iraq - that creates it's own problems. Flying over Syria would invite Syrian involvemnt on Iran's behalf, giving early warning of any raid and probably reprisal attacks by the strong Syrian military while Israel was denuded of aircraft. Syria would probably offer Iran airbases for staging any counterstrikes.

Using Iraqi bases or overflying Iraq would be equivalent to American involvement as far as the region was concerned. The ruling Shia would never give permission for Israel to strike Shiite Iran and no-one would believe otherwise. America has a very strong air presence in the country and is the defender of Iraq's sovereign airspace. It would be the final nail in the myth of Iraqi sovereignty (already damaged by U.S. and U.K. warrantless raids and prison breaks) and would doubtless instigate a general uprising and return to the insurgency of the Shiite majority in Iraq. The Bush administration, given it's history of non-planning in Iraq, may help Israel do the deed via Iraq anyway. It would be the most incredibly dumb mistake of all - leaving Coalition forces sandwiched between Syria and Iran while fighting every Iraqi except the Kurds. Israel, meanwhile, would be occupied by Syria and possibly other Arab states angered by their pre-emptive aggression. It would be a bloodbath. Israel could set back Iranian nuclear research by yeras in one strike, but the consequences would be far worse than the cure.

Iran is no pushover. It is the indigenous naval power of the Gulf - although it would be no match for even one US carrier group it has a couple of missile destroyers (ironically, one is ex-British and the other is ex-American navy), a score of highly capable missile craft, a couple of missile-armed frigates (again, ex British and American vessels) and a half dozen very capable deisel subs. Enough to put a dent even in a US fleet and enough to clean the clocks of the rest of the Gulf states. In the air, Iran has over 400 modern combat aircraft including American F-14s and F-4s (questionably maintained), Mig 29s and 31s and even Russian "Backfire" supersonic heavy bombers armed with cruise missiles. It's air defenses are formidable, including US Hawk missiles and russian SA-10s. On the ground, Iran masses some 1600 tanks (including around 100 of their own design which is rumored to be as good as the U.S. Abrams), over a thousand armored troop carriers, 3,000 artillery pieces including cruise missles and Scuds and 50 helicopter gunships.

There's no doubt in my mind that the current air and naval-air assets the U.S. has in the region, aided by cruise missiles, B2 Stealth bombers flying from the U.S.A. and B52's from Diego Garcia, could conduct an extensive and protracted air war against Iran, utterly devasting their nuclear program and indeed the whole country if so wished. Losses would be far higher than against Iraq but not prohibatively so. It is unlikely that Britain would get involved no matter what Tony Blair says. He is in an increasingly weak position compared with Gordon Brown and both the Foreign Minister and the Defence Minister have said the UK will not join a military adventure against Iran. However, the aftermath would be even uglier than that for an Israeli strike. Unless Israel was willing to begin a war of aggression into Syrian territoty (with predictable reactions from other Arab countries) then Coalition forces would be sandwiched between Syria and Iran, two nations with a mutual defense pact, and trying to withstand a widespread insurgency. Pakistan would probably be forced to cease co-operating with America and upwards of 20,000 al-Qaida trained militants from cities like Karachi would flood across the border between Pakistan, Iran and Iraq to join the mayhem. Coalition losses would begin to resemble those of World War Two on the Eastern Front.

A ground invasion of Iran would be even more disasterous. Imagine attacking a well defended mountainous country, even with air-superiority, with weary troops. It's not the perfect tank country that much of Iraq gives. Add in the general insurgency which would rage in the rear and a probable Syrian involvement again.

A per-emptive nuclear strike by either Israel or America? Increase the chaos and the rage in the moslem world by a factor of 100. If the neocons want to go looking for the "war of civilisations" they write so much about then that would indeed be the way to do it.

My worry is that, as I said above, the Bush administration (who are also pulling Israel's strings) are provably terrible at envisioning and planning for the consequences of their actions. They will almost certainly still try some kind of military option unless enough of their own number, as well as the official opposition, see reason. I'm not at all confident that will happen until after the fact.

Part One, The Back Story deals with the known truths and speculations about Iran's nuclear program.

Part Two - Sanctions or What? looks at the options available to the international community short of military action.
Posted by Cernig at 1/17/2006 08:26:00 PM