Political Fib of the Day - The Baker Mission, V2.0 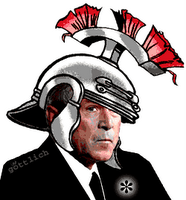 When the Iraq Study Group started to go public, I took it as a good sign in a few ways:

A lot has been said about HW's boys taking over the situation from W since it's a complete and utter cluster(bleep) at this point and I don't care.

It's not a good time for pride about peace with honor or some such hubris, and consigliere Baker was brought in for one reason and one reason only: To bail out baby W once again.

Even the Christians are beginning to realize that:

Even as Washington waits with bated breath for the Iraq Study Group (ISG) to release its findings, the rest of us should see this gambit for what it is: an attempt to deflect attention from the larger questions raised by America's failure in Iraq and to shore up the authority of the foreign policy establishment that steered the United States into this quagmire. This ostentatiously bipartisan panel of Wise Men (and one woman) can't really be searching for truth. It is engaged in damage control.

No problem with that on my part. History will judge and I've got a pretty good memory about who and what happened prior to our misadventures in Iraq. I'm not alone, either.

Just stop getting our troops killed for no good reason and I'll be a bit happier. In the meantime, I'll keep fibbing:

It's
All
Too Clear:
Their Mission
Is Absolution
For Crimes That Put Us In Iraq