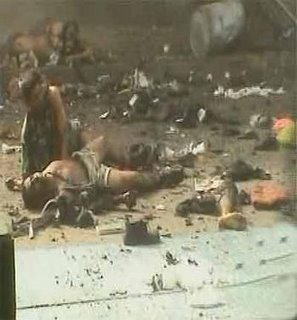 The continuing chaos we've created in Iraq is (again) beginning to get to me. All because W had to be a war president and Saddam was so easy to beat last time...

Eventually we're going to have to leave, and I don't know if there will be peace in Iraq within a generation or three...

It's just a (bleep) huge waste of too many of our (and Iraqi) resources...

Then again, the chaos may not be entirely accidental. George Lakoff writes:

Where most Americans see failure in Iraq – George Miller recently called Iraq a “blunder of historic proportions” – conservative militarists are seeing many successes. Conservatives stress the importance of our military — our national pride and worth is expressed through its power and influence. Permanent bases are being constructed as planned in Iraq, and America has shown the rest of the world that we can and will preemptively strike with little provocation. They succeeded in a mobilization of our military forces based on ideological pretenses to impact foreign policy. The war has struck fear in other nations with a hostile show of American power. The conservatives have succeeded in strengthening what they perceive to be the locus of the national interest —military power.

I don't think the chaos was deliberate to begin with - after all total success in Iraq would have pushed the neocon agenda even more effectively. However, I do think that once the situation began to go lemon-shaped, the neocons decided to make electoral lemonade for home consumption from the pulp of Iraq. I'm sure we all remember the rightwing message machine getting behind the idea that an Iraqi civil war wasn't a bad thing about this time last year.
Posted by Cernig at 7/11/2006 06:42:00 PM