Political Fib of the Day - "Bring It On" 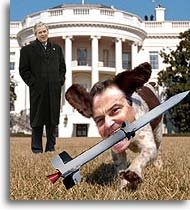 Finally Bush admits that tough-sounding talk such as saying he wanted Osama bin Laden "dead or alive" and taunting terrorists to "bring it on", followed by a failure to turn those words into action, have left him exposed to the world as the dimestore cowboy he always was. Blair's primary task at the news conference was to play Igor to Bush's Frankenstein.

The Left Coaster has the best of the pithy comments. It calls them Yesterday's Men but reminds us of Shakespeare's warning that "The evil men do lives after them."

Neither seems willing to concede their biggest mistake.

Blair,
Bush
Admit
To "Mis-steps..."
Some "Mistakes" were Made
Yet Parrot "Invasion was Right."